Animation has come a long way since ancient Greek pottery drawings. It has evolved and has now entered the digital age. Animation is the art of bringing 2D drawings or 3D models to life. Today, artists use this artistic style to share narratives on a screen, entertaining audiences worldwide.

Learn more about this fun and expressive art form and how to get started as a digital animator!

What are the different types of animation?

2D animation uses hand-drawn two-dimensional characters, props, and sets to tell a story and create movement. It’s how early Disney movies like Snow White and Bambi and popular cartoons like The Simpsons were created. In early 2D animation, characters were drawn frame-by-frame and transferred to clear sheets, called cels, for painting. Colored-in cel from Disney's Snow White and the Seven Dwarfs

While this process is sometimes referred to as traditional animation, mainstream 2D production has evolved from hand-drawn processes using pencil and paper to the implementation of digital techniques using computer software like Toon Boom Harmony or Adobe After Effects.

(Read What is 2D Animation? to find out more about this style of animation.)

In 3D animation, animators start with a rigged 3D model, positioning the character, prop, or vehicle and developing motion paths between poses (key frames) for their movement. The computer fills in the gaps and animates the character. The animator can refine each frame until they are happy with the animation. 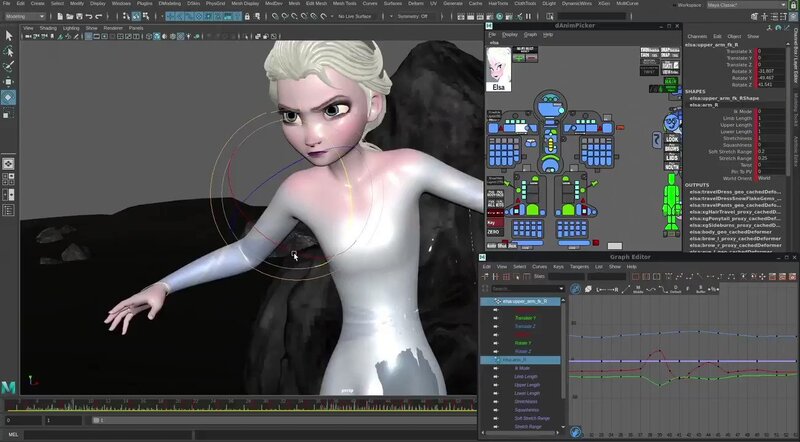 In a 3D animation like Disney's Frozen, a rigged 3D model can have thousands of articulation controls that allow animators to pose a character and craft a believable performance. (Image: Disney)

Once the movements are refined, the frames are passed to a lighting or FX artist to render and add effects for the final output.

(To learn more about the role of a 3D animator, check out What is 3D Animation?)

Although both animation styles are very popular art forms used frequently in film, TV, games, and advertising, there are several key differences between 2D and 3D animation. Stop motion is an animation style where you use real-life objects (like plasticine characters or figurines), moving them in small increments and taking photos of each new pose. When these pictures are shown in sequence, it appears as if the object is moving. It’s how films like Nightmare Before Christmas, Coraline, Isle of Dogs, and Missing Link were made.

Different objects and mediums can be used in stop motion animation, including:

Motion graphics are a technique used to animate moving text logos and basic animations, which differs from 2D, 3D, and stop motion animations. It’s like those explainer videos you see on YouTube or on TV. It’s also used in sports and news broadcasting.

Your choice of animation software will depend on your chosen style of animation. Below are some popular options.

What is the process of animation?

Once you have a story idea and you’re ready to animate, here are six common steps to animating your character:

Shot progression in Disney's Frozen, including recording actions to study the movements.

How to start learning animation

Learning animation usually stems from a love of animated genres. You can start an exciting future in animation by registering for digital animation courses online. There are a variety of courses available, such as CG Spectrum’s animation courses which cater to all skill levels.

These courses can prepare you for a career path as a:

How to become an animator

To become an animator, you want career-focused training in animation from industry experts:

To get a top animation studio job, you’ll need an impressive demo reel! A good resume and cover letter will help, but your demo reel is your chance to show your future employer your animation skills.

Are you ready to start your journey from animation beginner to animation pro?