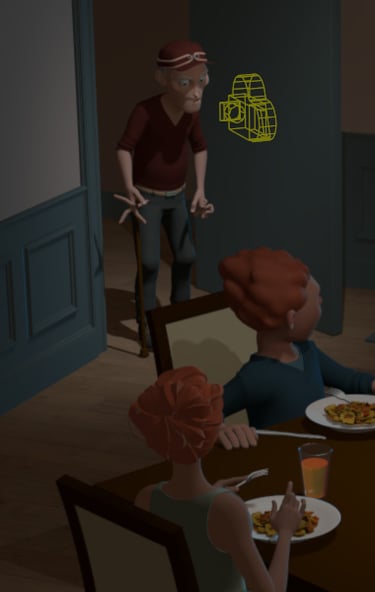 Learn about the role, salary, software and skills needed to become a Layout Artist

A layout artist designs the shot frame, camera paths and angles, depth, perspective, scale, and lighting for an animated sequence. They act as the eye of the cinematographer and gaffer in animation, working with directors to translate storyboards into sequences of action.

In an animated environment, the point of view of the audience is replicated by a virtual camera which is imagined by the layout artist. They frame out establishing shots, action, blocking, and character expression through the traditional screen language of close up, mid shot and wide shot to tell the story in the most compelling way.

The layout artist works in collaboration with the director to establish the camera angle, lighting and point of view of each shot of an animated sequence. They are the stylistic and technical eye of the entire shot, as well as choreographers of character action.

Layout artist teams interpret storyboards and animatics to their final iterations. They determine the position of characters within frame according to the dialogue and action of the script.

The responsibilities of the Layout Artist may include:

Layout Artists primarily work with animation and film editing software such as:

Layout Artists need to know how to translate the storyboard or animatic for the final animation. They must have a sense of scale and ability to realize background, characters and objects that work in proportion with each other to create a believable world.

Often these worlds will have a history, an economic framework and a specific narrative of their own.

The Layout Artist needs to express these idiosyncrasies through what is included and communicated visually in the scene.

Employers may look for the following skills in Layout Artists:

The average wage for a Layout Artist will range from USD $30,603 for entry-level jobs to USD $90,524 for senior positions. (Source: Payscale)