What is game development & how to start your career

We’ve all immersed ourselves in our favorite video games for hours on end, but have you ever looked beyond the magic and asked — what is game development?

The video gaming industry is booming, with more and more titles hitting the market every year, leading to ever more job opportunities in the industry. So if you are considering stepping behind the screen into game development let’s have a look at how it works and how to kickstart your career.

It all starts with an idea…

The life of a video game will start with a pitch to investors or a gaming company. The pitch will succinctly describe the concept of the game via its genre, characters, storyline, aesthetics, etc. A strong core idea will demonstrate that the developers have a firm grasp of a commercial product and its potential market.

Fleshing out the concept

Once the pitch is successful it is time to expand the concept further. Developers and designers are brought in to work on the key elements of the game:

At this early stage the developers will create the Game Design Document (GDD) which clearly outlines all the elements of the game for all the departments to work from. This is essentially a blueprint of the production process which will realize the concept of the game.

The designers, programmers and artists work together on a rudimentary version of the game. This is called Proof of Concept, where the idea is tested to see how it withstands gameplay and if the idea has legs. There can be a number of these early versions of the game, and they will serve a number of purposes.

Collaboration between creative and technical teams begins with a dry run of the final product. These are important team-building exercises for all involved, they help to further develop the GDD, and they provide important goalposts for the remainder of the project. 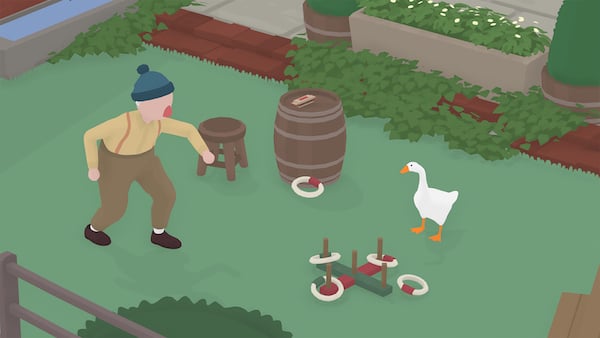 Untitled Goose Game is an indie 2-player game with rudimentary graphics & the simple concept of players as mischievous geese. The aim is to create wreak as much havoc as possible for the hapless villagers by disrupting their daily chores. The game was hugely successful, turning a unique premise into a highly entertaining game.

The prototypes are then tested by team members for quality assurance. This stage of the process helps to identify bugs, any new software that needs to be developed for the game, and if gameplay works.

Once production starts it’s full steam ahead. Departments have been established, all positions have been filled, and the GDD is now put into action.

Designers work on the levels, mapping out the course and objectives of the game, as well as overseeing production, keeping it on schedule and on budget.

Programmers code and build the back end of the game. They work with a variety of languages - C++, Java, HTMLS, etc - as well as customized programs to execute the specific functions of the game.

The designers, artists and programmers work closely to problem-solve and bring the game to life. Creativity and innovation are required from all departments within their own teams and while working together. World-building is not an easy task but it is highly rewarding.

CG Spectrum alumni Ferran Perez created the Shooter for Dummies game for his course assignment. The idea was to make a VIP game where the player takes on the role of a dummy.

Sound is an important element to the experience of gameplay. A score needs to be composed, recorded, and mixed. Dialogue may be involved, which involves casting, recording, and synching to the animation. Sound effects (SFX), foley, and ambient noise are created, edited, mixed in a sound studio, and integrated into the game.

Once a rough version of the full game is ready it goes back for testing. Quality assurance testers are brought in to play the game and push it to its limits. They will identify glitches and areas that need further work for the developers to iron out.

The game then undergoes its last stage when special effects are integrated and a final polish is done. It is then released for distribution and the marketing campaign goes into full swing.

So, where do you fit in?

There is a myriad of roles that you can undertake in the game development process. If you have creative flair being part of a design or artist team might be for you. If you have a technical bent then programming may be your gig.

The parts you enjoy the most will guide you towards your future in game development. Do you enjoy the graphics side of it? Is coding your passion? Or does game design inspire you?

You may aim to be an all-rounder, specializing in a number of areas. When working on smaller projects or at smaller studios, you will be required to take on several roles. Over time you will find your niche and the more experience you have the more valuable you will be as an employee.

How to start your career in game development

Whatever your passion you will need to learn your craft, and being guided by industry professionals through basic to advanced courses is the best way to start. CG Spectrum runs courses in game design, game art, animation, and game programming. The courses are all run by industry professionals who act as mentors, guiding you and giving valuable insight into what it’s like to work on major titles at world-renowned studios.

Game Design course teaches expert game design via a 1-on-1 mentorship with a professional game designer. You will learn AAA game standards, how to build game levels and interfaces, how to combine gameplay systems to create engaging experiences, and what it takes to launch a successful game.

Foundations for Game Art Course provides a comprehensive overview of 3D modeling and animation. You will learn character modeling, building game environments, and create props using industry-standard software Maya, Substance Painter and Unreal Engine 4. By the end of the course, you will have created a small-scale game of your own, a valuable experience for entry into game development.

Game Programing course is designed for aspiring game programmers, beginning with C++ techniques and then moving onto Unreal Engine 4 training. You will learn to build levels, gameplay elements, character animation, particle effects serialization, loading and streaming levels. By the end of the course you will have built your very own game from scratch.

The more connections you have with other game developers the more ins you will have to the industry. This is especially important early in your career. Join online gaming communities and share your ideas with like-minded people around the globe. Share your work with them, write up online reviews on industry sites and get your name out there.

Create your own brand

Set up your own gaming site and make it look as professional as possible. Wordpress, Squarespace, etc allow you to set up for free using templates that are quick and easy to create.

Populate your site with examples of your best work - sketches, games you’ve created, character design, etc. Share game reviews, write mini-articles on the industry and promote your favorite gaming software. Post your resume to show off your career highlights.

Be entrepreneurial with your site. Your talent is your brand, treat it like a sellable product. Your site will be your calling card when you apply for jobs and will show potential employers what you are capable of.

Take a look at CG Spectrum mentor Heath Smith's site it's a great example how to promote yourself.

The advent of virtual production has opened up new opportunities for those skilled in game development. Productions filmed using a volume stage, which creates a virtual environment using LED walls to power a game engine such as Unreal Engine, require crew to operate the software on set in real time. Film and gaming technologies are merging, changing production pipelines and expanding career pathways for artists. If you're interested in worldbuilding or working as a realtime 3D artist for games check out our realtime and virtual production course.

Many game developers start their careers as QA testers, pushing titles in development to their limits and identifying glitches. Approach local companies for internship positions, paid or unpaid. The goal is to secure paid work, but a short stint as an unpaid intern could earn you valuable contacts and lead to future work.

Your first jobs will be crucial for where your career is headed. Remember that game development happens in teams, you need to be a good team player to continue to secure jobs. Refine your communication skills and network widely.

Want to start a career in Game Development?

Our game development and virtual production courses are taught by industry veterans who provide personalized training in the skills to launch your career, train you in professional practices, and assist in your job search.

A job in game development can be hugely rewarding and lead to unexpected career turns. Knowing the ropes and being connected with the industry will give you a leg up in this highly competitive field. It’s all in your hands, upgrade your skills and you will reap the rewards!

Explore beginner and advanced courses in game development and get your career off to a great start!

What is the Difference Between Game Programming and Game Development?

Mental health in the VFX and video game industries

Getting a Job in Game Development: 8 Strategies for Success