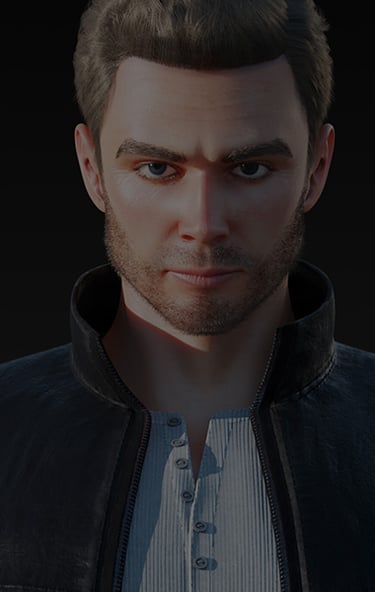 Learn about the role, salary, software and skills needed to become a 3D Character Artist

Character Artists for computer games draw up the visual elements of as briefed by the Art Director and Lead Character Artist. They create illustrations of characters, vehicles, environment, weapons, props, etc from the original concept artist’s sketches.

Their tasks can also include creating storyboards, scenery, as well as adding shading and texture to visuals. The Character Artists work closely with creative and technical teams to drive the visual quality of the game and to maintain a consistent character style. In the competitive gaming market players now expect high standard graphics, it is up to the character artist to deliver on the overall artistic quality of the game.

Character Artists in film create the 3D characters, creatures or objects that are integrated into live-action. Their work primarily takes place during the post-production process, but sketches and concept art will be developed from pre-production stages as part of the film or series’ production design.

The processes are the same as in gaming, however as film has a linear structure, they will not incorporate interactive elements or behaviours. This work is vital to the believability of the production as these elements need to fit seamlessly into the footage for the final product to be believable

The role of the gaming Character Artist is to drive the visual quality of the computer game. They draw up the 2D sketches of all the imagery required of the game, maintaining a certain style and finish. These illustrations go through a process of revision and refinement in consultation with the designers and game developers until the signature look is established. During the course of production the Character Artists curate and oversee the consistency of game graphics.

The next step is to render the artwork into three-dimensional form. Character Artists undertake the task of transforming 2D illustrations into 3D models with a skeletal framework, functioning limbs and finished texture.

The role of the Character Artist in live action and animated features is to create concept art based on the script and develop it throughout the production process.

Responsibilities of a Character Artist may include:

Character Artists work exclusively with computer software. A fluency in all or some of the following platforms is required:

The skills required for a 3D Character Artist include a high level of design ability and a strong understanding of the film or game production pipeline.

Employers may look for the following skills in a 3D Character Artist:

The 3D Character Artist role is not generally an entry-level position. While there are some junior positions available in the industry, most Character Artists have years of character creation, sculpture and design behind them. A good way to break into this field is to learn 3D modeling and build up a portfolio of original 3D character work.

To learn more about this field, visit: What is 3D Modeling?

3D modeling for beginners starts with the essentials: navigating Maya, setting up workflows and building 3D assets from scratch. See the differences between film and game models and find out how to work with your models in Unreal Engine and texture in Substance Painter.

Speed up your workflow and further your environment and character design skills by creating more detailed fully rendered models, including a creature with skin, scales and fur. This course includes a big focus on portfolio prep and career development so you graduate studio-ready.