Compositors are in high demand as almost every production requires some form of compositing - from seamlessly integrating VFX shots with CG characters; FX and environments; to working on invisible VFX like stray hairs, rain or fog in a TV show or commercial. Read on to find out what a compositor does, what they earn, and how to get started. 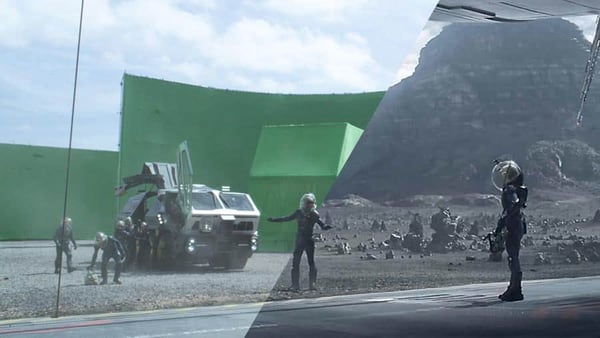 VFX compositing seamlessly integrates digital assets with live-action footage to bring together the final shot of a film or game. Compositing is the final step of the VFX pipeline.

What does a compositor do?

A skilled compositor layers together various elements in a way that makes them appear to naturally belong in the same space. For example, a script has a scene where a missile hits a building in a big city. Firstly the background is shot (referred to as a plate) that contains the building in the foreground and the cityscape in the background. The animator animates the missile, and the FX artist adds smoke effects and an explosion with building destruction.

Once this is all rendered out, the compositor layers the missile, smoke, explosion, and building destruction into the shot, using color correction and z-depth to bring it all together.

Z-depth is basically a black and white representation of the depth of an object in a scene and is very important in compositing 3D elements.

The compositor may be in charge of creating entire worlds or merging worlds. In Independence Day: Resurgence, the compositor's job was to destroy the world by mixing a bevy of destruction assets with 3D modeled cities and live-action plates. A compositor must be prepared to tackle many unique tasks. A day in the life of a compositor

The daily routine of a compositor varies depending on the type and budget of the production. They will research different elements during the course of the pipeline. This may include referencing color correction, matching specific shots to the entire film, matte painting requirements, and sourcing stock footage if needed. Compositors also need to know the depth of field of shots and what camera/lenses were used to shoot plates before beginning a job.

Another common compositing task is rotoscoping. This is essentially the drawing of outlines using a pen tool or other methods to separate an object from elements in the scene. For example, if a scene features a 3D destruction element in the background with a character in the foreground, the actor will need to be rotoscoped out of the shot. In some cases, the actor will be shot on a green screen so it's easier to remove the green and add in elements around and behind them.

In smaller companies a compositor may have to do all of these tasks, whereas in larger companies junior artists will generally be assigned rotoscoping and green screen keying duties. Keep in mind that as a compositor you have to be flexible with tasks because every new project will result in new and unique challenges.

How to become a compositor

Experiment with a versatile palette of projects. For example, you could gather footage and images to build out a large landscape. You could create and gather elements to build an out-of-this-world sci-fi scene. Practice digital painting in Adobe Photoshop to learn how light and shadow are portrayed in the digital space. These are just a few examples, but with some unique ideas and formal training in a compositing program like The Foundry’s Nuke software, you can build up a variety of shots for your personal portfolio.

Nowadays a small, inexpensive green screen is easy to come by. It won’t be the same quality as a blockbuster film, but it’s good enough to practice keying with. Pick one up and shoot a simple scene with a friend. Work on keying and replacement. Get a similar shot without the screen to practice rotoscoping. These are essential skills for a junior compositing artist to have.

Another thing you may want to experiment with is stitching together 360 video. You may get a job as a junior artist at a studio that does this kind of work for clients. Impress your seniors and show that you are keeping up with current trends in technology by practicing this technique.

Watch Career Development Manager Maxine Schnepf's interview with JV Pike and CGS mentor Jason Gottlieb from FuseFX about their work on The Orville and Ratched.

Tips to break into the VFX industry

Great examples of your compositing work will help you impress prospective employers. When working on your compositing portfolio, think of the types of films you want to work on. Gather assets to create similar shots from sites like Turbosquid and Textures.com, but be realistic about what you can accomplish at this stage. Many artists at this level want to composite together a blockbuster level shot. Instead, think about how you can show an understanding of the fundamentals of light and color, and how they can be used to make the elements of a scene blend together seamlessly.

As with other VFX disciplines, there are many networking opportunities available for compositors. Whether online or in-person, meetups are always happening. Some of these events are led by guest speakers or software engineers and you can pick up exclusive tips and tricks.

There are also multiple conferences every year where software companies attend question and answer panels. Be proactive!

It's not enough to build your portfolio pieces and forget about it! Compositing software and tools are constantly evolving, so it's crucial to stay up to date.

For anyone interested in becoming a compositor, Senior Compositor at Weta Digital and CG Spectrum mentor Brittany Piacente offers this advice:

Push yourself to get out of your comfort zone and just try things out. It may not work. It may be a failure, but failure is delay not defeat. I didn’t get to where I am today by being comfortable.

How much does a VFX compositor make?

The average compositor salary is about $100,443 USD/yr (source: Glassdoor). Senior compositors and compositing leads may earn more with their years of experience and knowledge. As more and more fantasy worlds, epic destruction and effects are needed for film, games, and even VR, the need for talented compositors will continue to grow.

Learn more about working as a professional compositor in our interview with Oscar-Nominated VFX Supervisor Genevieve Camilleri, or check out Senior Compositor Brittany Piacente's interview on The CG Spectrum Podcast about working on Marvel's Loki (below).

Want to learn compositing from an industry professional?

Skilled VFX compositors are in demand! Start your journey towards an exciting career in TV and film. Our VFX school offers beginner and advanced compositing courses taught by industry experts who have worked on films such as Star Wars: The Force Awakens, The Amazing Spider-Man, and Assassin's Creed. Enroll today!