Join us for this exciting event where you'll hear from some of our mentors of FX and Compositing!

In case you couldn't join us live, or simply wanted to relive the fun, scroll down for the CG Spectrum VFX Open Day replay and read the top Q&As from the live chat here!

If you have any questions about our school or courses, get in touch. We'll see you in class!

What to expect at CG Spectrum's VFX Open Day:

Not only is CG Spectrum ranked in the Rookies Top 50 Schools, we're also a Houdini-certified school. 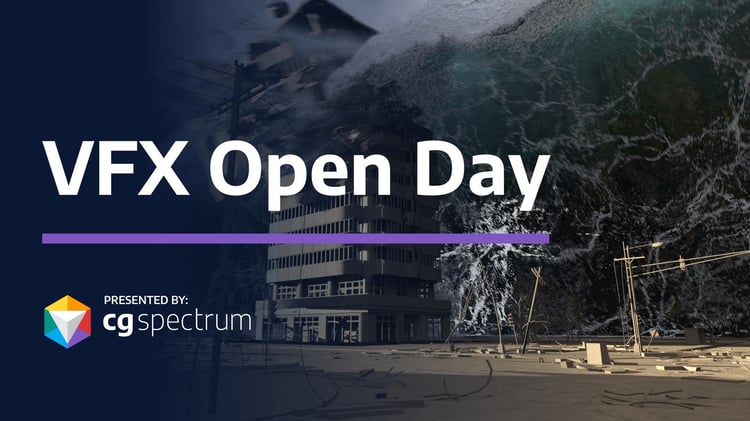 Ben Fox | CG Spectrum Mentor of Houdini FX - Ben Fox is the Head of Digital Production at the Morehead Planetarium at UNC Chapel Hill pushing the limits of Houdini to build immersive worlds. Before that, he was a Lead FX Technical Director at Framestore, New York. Notable past projects at Framestore include feature films SALT and The Smurfs as well as numerous high-profile commercial projects: GEICO, Benjamin Moore, Mercedes Benz, Snickers and HBO to name a few. Other notable projects include spearheading Unreal Engine VR experience builds for Game of Thrones, Interstellar, Ready Player One and the Lockheed Martin Field Trip to Mars.

Brittany Piacente | CG Spectrum Mentor of VFX Compositing - Brittany is a Senior Compositor for film & TV, now working at Weta Digital. She has been in leadership positions at each studio she has been with, including Method Studios, Mr. X, and Deluxe in LA, Toronto and Montreal. Brittany has a BA in Animation from SCAD and her skills range from compositing to VFX to stereo work. Brittany's long list of credits includes: Loki, Vikings (Season 6), Star Wars: Episode VIII - The Last Jedi, Guardians of the Galaxy Vol. 2, Black Panther, Mad Max: Fury Road, A Dog's Journey, Blade Runner 2049 and American Gods.

Sean Amlaner | CG Spectrum Compositing Dept. Head - Sean has worked as a Compositing Supervisor, Senior Compositor, and Senior Artist Trainer for studios such as Technicolor VFX, Sony Pictures Imageworks, Walt Disney Animation Studios, Rhythm & Hues, and many others. During his career, he has had the opportunity to work on projects such as Star Trek: Picard, Star Wars: The Rise of Skywalker, and Avengers: Infinity War.

Free Visual Effects webinars to inspire you on your journey into the film and games industry.

How to get a job in VFX: Pro tips to get into the industry

How to make Oscar-worthy VFX: Love and Monsters

The role of a VFX Supervisor

VFX Supervisor Jorge Razon shares what it was like to work on Umbrella Academy, The Boys & Game of Thrones at SOHO VFX

All webinars
For tips and resources, subscribe to our newsletter