Aurore Coutelier had always dreamed of building worlds that positively impacted people’s lives, and architecture initially seemed like the way to do it. However, after five years as an architect, Aurore couldn’t help but feel like something was missing. Then she discovered virtual production and felt like she'd found her calling!

Read about Aurore's journey from architecture to real-time 3D and see one of the magical worlds she built as part of the Real-time and Virtual Production Course at CG Spectrum, which was featured by Unreal Engine as part of their Community Spotlight!

Why Aurore made the switch from architecture to virtual production

I had been working in the architecture industry for five years at one of the top architecture companies in Australia. While I enjoyed the work in general, I somehow found myself unhappy.

Like a lot of people, I started working from home during COVID. This left me with extra time for introspection but also some fun side projects, which is how I started creating mini isometric 3D worlds in my spare time.

A still from Aurore's real-time 3D cinematic, The Last Voyage.

This is going to sound cheesy, but after a few weeks of teaching myself, I had this Eureka moment of realizing, I would be happy doing this for the rest of my life.

So I started looking into how to turn this into a career and came across an article on CG Spectrum about their real-time 3D and virtual production courses, and I knew I had to take a leap of faith and go for it.

Aurore's journey down the River Styx

The Last Voyage concept came from a wish to bring my stylized art into a realistic world. I had been playing the Supergiant Games game Hades and started wondering what the River Styx could look like in a fantasy/fairy tale world. I thought that the challenge of balancing a moody yet magical atmosphere would be really interesting.

Once I have a story, I usually go straight to gathering reference, from both games and movies but also from the real world. My intent was to recreate the feelings I had watching fairy tales or movies like Harry Potter.

From then, I had a few very rough thumbnail sketches to figure out the composition, but I mostly started experimenting with basic shapes and framing shots directly inside the engine.

Once I had established a solid blockout and storyboard, I spent a lot of time gathering assets from Quixel Bridge, identifying what would need to be modeled/modified as well as any possible challenges (I knew early on that lighting would be an essential part of the scene). 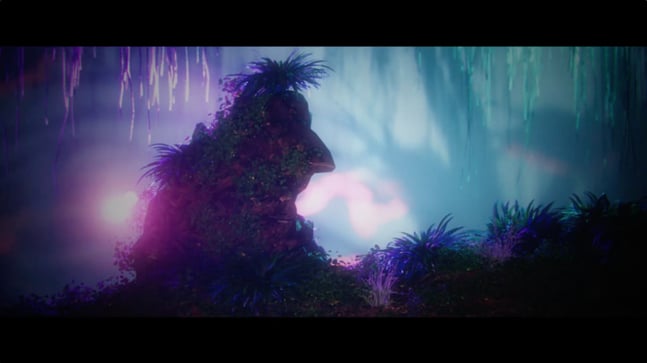 A mossy rock in The Last Voyage. Atmosphere and lighting were integral to Aurore's cinematic.

The next important part was to create a master material. Having control over all technical aspects of the shaders allowed me to art direct the scene as a whole. By the end of the process, those elements included color controls, emission controls, and moss control. This was a very time-consuming and challenging part, but I knew it would pay off in the long run.

After that, it was time to put everything together. As I was populating the scene, I was either creating new material functions to implement into my master material, modifying shader properties to be integrated into the scene, or modifying assets directly in Blender.

When most of this was ready, I started breathing life into the scene by adding VFX and lighting. I used the fog and lights to create the mood and added particle effects, wind, and animated mesh and materials to finish up the piece. To me, atmosphere and lighting are the most important part of communicating a story, so this was a really key part of the process.

Coming from a completely different industry and having only done “cute” stylistic 3D art before, venturing into realistic world building was very intimidating. The way to overcome this for me was to literally break down everything I had to do step-by-step. So, for example, I would start the day knowing I’d be focusing on the tree area only.

Taking daily screenshots to realize how much I was progressing every day was also really helpful and motivating.

I kept this workflow all the way to the end. For example, lighting a really large-scale scene can be quite overwhelming, so I started with smaller areas first. When it comes to lighting, I found that going from micro to macro was really helpful. 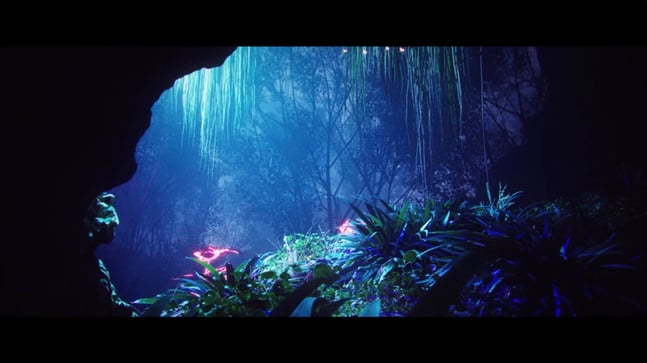 Aurore found breaking up her tasks into smaller pieces very helpful while working on her project in Unreal Engine. CG Spectrum is an Unreal Engine Authorized Training Center and Academic Partner.

Why Google doesn't have all the answers

Getting first-hand insights from an industry professional was amazing. William Faucher made the Q&As fun, and his passion was very contagious. I left every session feeling inspired and had the confidence to keep on tackling the week.

Having studied on my own before CG Spectrum, I also realized that there are a lot of things you just can’t get from Google. My mentor was very generous in sharing his own experience and lessons learned along the way.

I was able to gather so much knowledge on light theory, post-production workflow, and tips to add realism to a scene, amongst others.

Turning her real-time 3D passion into a career

Real-time 3D and virtual production can open so many doors, and I am still exploring my options. But I have found a real passion for lighting and 3D environment art, so I think I will pursue these areas in the future. I also plan on continuing to build worlds and telling stories as personal projects. Some of Aurore's work on her ArtStation.

To keep up with what Aurore does next, you can follow her on ArtStation and LinkedIn.

Take the first steps towards your career as a real-time 3D artist with career training and mentorship at an Unreal Authorized Training Center.

Build new worlds and a new career by studying to become a real-time 3D artist at CG Spectrum.