World building in Unreal Engine: The role of a 3D environment artist

What does world building mean?

World building is a term that differs slightly from industry to industry. It’s probably best known for its important role in storytelling. Great storytelling often relies on imaginary worlds to help shape its characters’ story arcs while also immersing and entertaining the audience.

In this article, we refer to world building as visual storytelling in film and games, also known as 3D environment art, digital set building, or landscape creation, and explore the important role 3D environment artists play in bringing these worlds to life using game engines such as Unreal Engine.

According to CG Spectrum Mentor and Unreal TD William Faucher, in his interview with 80 Level, world building in Unreal Engine still follows many rules of traditional storytelling.

World building is building a world in a way that tells a story. Making a storyboard and setting up the camera in a way that feels as cinematic as possible. It is the process of creating a sequence that evokes emotions.

In more practical terms, world building is the process of acquiring or creating digital environment assets from a library such as Megascans and compiling them in a 3D scene in Unreal Engine. Assets such as buildings, streets, foliage, furniture, rocks, mountains, moss, and all other elements found in real life. These are used to (re)create existing worlds such as New York City, or imaginary worlds like J. R. R. Tolkien's Hobbiton.

As an Unreal Academic Partner and Unreal Authorized Training Center, CG Spectrum’s Unreal Engine courses can help set you on the path to becoming an Environment Artist.

What does an environment artist do?

In online games, VFX, and content creation an environment artist specializes in creating the environments, or scenes, in which characters and props operate. It includes populating the environment with assets, commonly known as set dressing. Creating believable 3D environments requires research and collating real-world references to map out the different aspects of its geography.

On a more technical side, environment artists are also responsible for optimizing the topology of assets in their scene, so the environment runs at a manageable frame rate. Although world building is a technical job, William also points out that the rules of composition, lighting, anatomy, and color theory still apply.

CG Spectrum’s Realtime 3D & Virtual Production Course covers everything an aspiring environment artist needs to know to create their own worlds. From the fundamentals of lighting, composition, and color; to blocking out, fleshing out a scene, setting up cameras, rendering out a portfolio-worthy cinematic shot.

What is the scope of world building?

We asked CG Spectrum mentor and World Building Director Carl Shedd about the scope of world building within a project. "World building can be as simple as subtle environmental storytelling, for example, a messy desk in an otherwise sterile bedroom, children's artwork on a refrigerator in a kitchen with a work coat draped over a dining chair, and a briefcase on the table.

World building can be as significant as defining global traits for your fictional universe, elements of huge consequence!

How do people in this world travel? Where do they work? What do they do for extracurricular activities? Where do they take their kids to school? What's the population density and how does that affect how our inhabitants live? What is the class structure of the world and how is that reflected in living arrangements and quality of life? What are the big brands on billboards? Who is famous? Is the world powered by fossil fuels or nuclear fission? Is electricity delivered underground, or above ground on poles and sloppy, dangerous bundles of ill-managed wires? 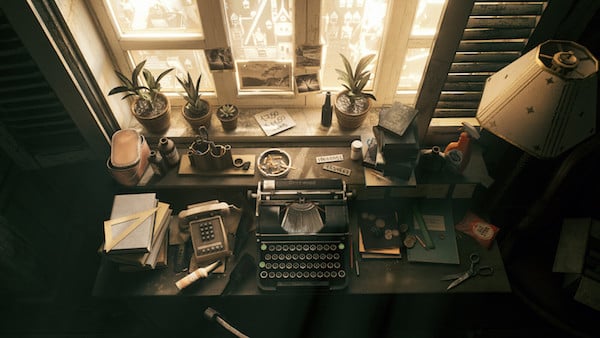 "The scope of world building and the responsibilities of world builders can vary dramatically between different creative industries and even within work environments. One trait that is consistent regardless of scope; there is always a story to tell no matter how small!

As a junior artist you may receive a task that feels insignificant in relation to the "big picture", but only at first glance! Step back and consider the universe your object exists within, you'll find unique ways to apply those rules and external influences.

"Ah man, I gotta make a mug." Not the most exciting piece for sure, but let's ask a few questions about this mug. What will it hold? Coffee? Tea? Liquor? Some sort of weird alien brew? Does our world have established brands? People often collect mugs as souvenirs when vacationing, does our world have any unique locations that we could refer to? Novelty cups are huge, I wonder what novelties exist in our world? Perhaps pugs are heavily lauded, maybe a pug face with a silly phrase "This Girl Loves Pugs". Everyone, no matter their role in the production pipeline, can be making great contributions to the overall task of world building!"

How is world building in Unreal Engine used?

World building in Unreal Engine serves to enrich storytelling across all forms of content creation and virtual production. It provides some of the fundamental components required of any good story:

Let’s explore these in more detail.

Have you heard the adage “a picture is worth a thousand words”? World building creates environments that provide its audience with layers of context used to help shape the story arc for its characters. Important contextual clues such as what period or country (or planet!) a story is set can be told entirely through environment art. World building also often plays a crucial role in setting up its characters' motivations, challenges, and general mechanics.

Unreal Engine allows environment artists to add incredible detail to each scene, weaving a rich tapestry of context for the unfolding story. With access to Megascans and Unreal Engine Marketplace, building an intricate world in Unreal Engine has never been faster or easier.

Unreal Engine takes immersion to the next level. The most famous example is how Unreal Engine digital landscapes were projected onto curved LED screens for Disney’s The Mandalorian, replacing more traditional green screens. In an interview on the Star Wars official website, The Mandalorian’s VFX Supervisor, Richard Bluff, explains how Unreal Engine landscape creation forged immersive and interactive backdrops for key players in the filmmaking process, including actors, camera operators, directors, and DOPs:

There was no need for the questions of: where am I going? what is this location? how deep does this go back? how tall is the ceiling?

Not only do Unreal Engine’s photorealistic world building capabilities create a better experience for content creators during the production stage, but the audience also benefits from a more immersive experience.

Visual consistency is required for an audience to remain immersed. Successful world building must adhere to a set of rules, namely the laws of physics. It’s when those rules are broken that the audience is thrown out of that world. Remember the Starbucks coffee cup that went viral after it was accidentally left in shot on Game of Thrones? Fans were outraged! That’s because a modern-day coffee cup dragged viewers out of the fantasy world that, until then, had been built so meticulously.

In Unreal Engine, 3D environments can use the same light rigs and shaders to create consistency. Set pieces are often modular so they can be mixed and matched, while vegetation and rocks can be rotated and scaled — creating cohesive but not identical environments. Plus, if something doesn’t look right, changes can be made in realtime!

There are many tools and software available when it comes to world building:

So how do you choose? William recommends Unreal Engine:

One of Unreal’s biggest perks is unlimited access to the Megascans library. The fact that we can bring in anything with the Quixel Bridge to build entire worlds within minutes and get amazing results in realtime is what really sets Unreal apart from other DCCs.

Free Realtime 3D resources and articles to inspire you on your journey into the film and games industry.

What skills do you need to become a game artist?