With film, TV, and video game fans all over the world hungry for fresh content, there are more opportunities than ever before for aspiring 2D and 3D Animators. But what is the difference between 2D and 3D animation, and which style of animation should you dive into?

The main difference between 2D vs 3D animation is that 2D animation is more artistic and 3D is more mechanical/technical. 2D requires a large amount of illustration, as every frame needs to be drawn, either on a digital tablet or hand drawn. While 3D animation is tasked with creating movement via 'rigs', where a 3D model is essentially given a skeleton that can be manipulated in a virtual 3D space.

First thing's first: neither 2D nor 3D is objectively “better". Both have their place!

To take a classic video game example, Mario 64 needed 3D animation as it used a 3D game engine. On the other hand, classic Super Mario has no use for a 3D Animator because the art is two-dimensional. Neither of these games suffers because of their art style—both are great games!

The style you pursue will mostly come down to your artistic preference. If you are creating a new video game, TV show, web series, or even a static medium such as a comic book, you might decide that one style suits the premise better. 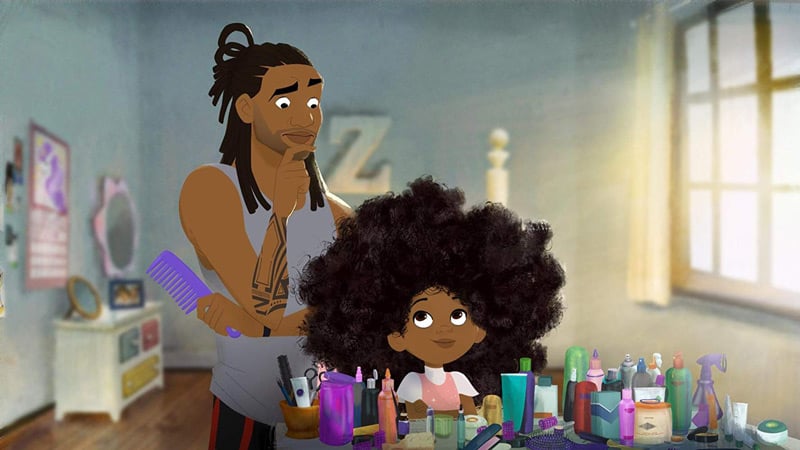 Matthew A. Cherry, Director of the Oscar-winning Hair Love, decided his short film would be better suited to 2D animation.

There are times when more practical aspects come into play, such as budget. For a show like South Park, the animation is very straightforward and would undoubtedly be more expensive were it done in 3D. On the other hand, a film like Frozen would be prohibitively pricey to achieve anywhere near the same level of detail using traditional 2D animation.

The illusion of movement is created when individual drawings are sequenced together in quick succession. One second of time is usually divided into 24 frames, and there can be as many as 24 unique drawings in one second of animation (24fps), or as little as two.

The easiest way to see this technique in action is in "flipbook" animation. Draw a ball on the lower corner of a notepad. On the next page, draw another ball but have it be slightly to the side of where the original ball was. Continue this process for several pages and then flip through them quickly. If done correctly, the ball will appear to move as you flip through the pages. This demonstrates the illusion of movement.

Fully-fledged 2D animation works in the same way but is far more complicated. Picture our 2D animated ball, but instead of a rough circle doodled on a notepad, it's an entire scene with multiple moving parts. There will also likely need to be at least a dozen pages per second, over the usual 24 frames, to achieve the desired smoothness of the animation.

Now with computer software like Toon Boom Harmony and Adobe After Effects, mainstream 2D production has replaced these traditional hand-drawn processes using pencil and paper for much faster and more cost-effective digital techniques. This allows 2D Animators to create in minutes what used to take weeks.

There are techniques to make life easier, of course. For example: if parts of the scene are static, there is no need to redraw them every frame, you can simply use the same image. Tweening animation has also become quite common in the 2D animation process, where static parts of the model are moved around to achieve animation, rather than redrawn.

The above-mentioned South Park is one example of this. It can help to think of this method in terms of drawing a scene, creating some characters and cutting them out, and then placing them on the scene and moving them a frame at a time. The advantage of this technique is that it is much faster, especially with modern animation software than traditional 2D animation. The downside is that it is much harder to achieve natural-looking motion.

3D animation is a layered process that involves many skills. Unlike 2D animation where the ability to draw is all you need to get started, 3D requires 3D models which are 'rigged' and then animated. 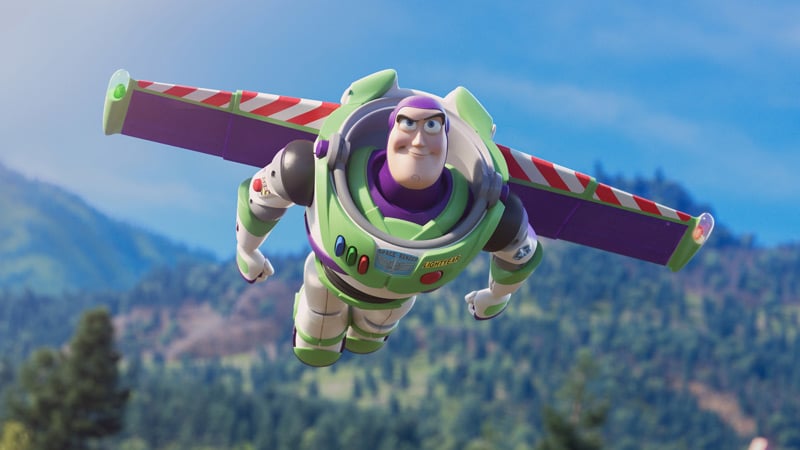 In 1995, Pixar's Toy Story made history as the first feature-length 3D animated film

The different stages of 3D animation

The first step along the road to creating 3D animation typically involves sketching out how you want your scene and characters to look. From there, you create a 3D model of your animated object. This model is then textured (color and detail are added to your 3D model).

The model also needs rigging. A 3D model rig is like a skeleton that helps the 3D character, prop, or vehicle move. For the most part, the rig follows the basic structure of a real skeleton (if the 3D animated model is a person or animal), though not precisely.

Now your model is ready to be animated. You can drop your rigged 3D model into your scene and begin posing it. It's not always necessary to pose each frame in the same way you would draw each frame for a 2D animation. Using keyframes to determine the position a given part of the model needs to be at and allowing the animation software to interpolate the frames in between can save a lot of time.

In larger animation studios, there will typically be dedicated Artists, 3D Modelers, and Animators all working on their part of the animated movie. It's also not uncommon for each stage to be compartmentalized.

If you're going to make your own 3D animations, you will need to become competent in every step. Even if you're planning on specializing in 3D Animation, it doesn't hurt to become familiar with every step of the pipeline. Doing so will help you become a more well-rounded Animator.

Choosing between the two styles will primarily come down to personal preference. It's not really a matter of 2D vs 3D animation; it's what you find most enjoyable. Though it is by no means a hard rule, 2D tends to suit people who are more artistic in nature, whereas 3D often suits those with a more technical mind.

If you really want to experience the difference, try a bit of both and see what appeals to you the most. CG Spectrum offers beginners animation courses in both 2D and 3D disciplines. The online Introduction to 3D Animation Course gets you feeling confident rigging and animating your own 3D characters using the computer software Autodesk Maya, which is used by major film and game studios around the world. You'll be personally mentored by industry experts who worked on War for the Planet of the Apes, The Willoughbys, and video games like Dauntless, Resident Evil, and Batman: Arkham Knight. You'll graduate with an original piece of work for your demo reel!

How to get into 2D or 3D animation

With the wealth of resources the internet provides, getting in a job in 2D or 3D animation has become much easier (provided you have an excellent understanding of the principles and awesome work in your demo reel to show for it!). There are many free tutorials available to help you get started.

It goes without saying that you can accelerate your career by taking a formal animation course through CG Spectrum. These courses are taught by industry experts with years of experience working on blockbuster films and Triple-A games. With their mentorship, you learn animation skills for success and get amazing insights into life in the industry.

Besides a high-quality education, here are two more tips to help you become an Animator:

Have a go at making an animated movie and sharing it on YouTube or your own website or social media. Doing solo projects will give you experience as well as something concrete to show prospective employers.

If going it alone does not suit you, (for example, you may be a great artist but not so good at storytelling), partner with someone whose skills complement your own. If you're looking to break into 3D animation, you could team up with someone who is making their way into 3D modeling. The resulting product will serve as a portfolio piece for both of you!

Another route to consider is an internship. Some internships are paid, however, most are unpaid and not always a viable option when you have bills to pay. The advantages of an internship are the chance to get real-world experience and get your foot in the door. If you make a good impression, you can increase your chances of getting hired when a job becomes available. The experience gained from working in a real studio will be invaluable, even if your ultimate goal is to freelance.

In conclusion, it's clear that 2D vs 3D animation really comes down to your personal preference. If you're still undecided after reading this, give both a shot. You may be surprised to find that despite being a very talented artist, you find the mechanical nature of animating 3D models more enjoyable. Or perhaps your love of drawing steers you towards the more traditional 2D animation route.

You'll never know until you try!

Learn animation for film and games!

There's no better way to learn 2D animation than from award-winning animators who have worked on blockbuster films at top studios like Disney, DreamWorks, and Industrial Light and Magic! Take a look at our 2D Animation Courses taught by industry mentors. CG Spectrum is proudly a Toon Boom Authorized Training Centre.