Hanny shares her visually stunning final project with us, a short cinematic called Naima, detailing how she created her scenes in Unreal Engine, where she drew her inspiration from, and how the technical and creative support of her industry expert mentors allowed her to bring her vision to fruition.

My name is Xiaohan, you can call me Hanny. I am originally from China and recently moved to Iceland. I currently work at a game company called Directive Games as a technical artist where I first learned the general workflow of creating games and how to use a game engine.

I've always been drawn to cinema, especially art house movies. Before working in the games industry, I went to Hampshire College in the States for film and liberal arts studies, which led me to be a creator and was how I was introduced to 3D art.

Hanny's final project as part of the Unreal Connectors course.

I discovered CG Spectrum through a post about the Unreal Connectors program on Unreal Engine’s official site (CG Spectrum is an Unreal Academic Partner and Authorized Training Center). The Unreal Connectors: Virtual Production program looked like a well-rounded course and covered a lot of the things I was interested in studying, particularly learning more about cinematic production using Unreal Engine. So, I signed up!

Before I started my course project, I actually didn’t have a solid storyline. But since the beginning, I knew that I wanted to use the virtual production course to make something of cinematic quality. So I gathered shots from some of my favorite arthouse films that have unique lighting and colors, including Nomadland, Pierrot le Fou, and Paris, Texas.

When considering the storyline, one of my mentors, Lumiere Award Winning Filmmaker and Virtual Production Expert, Deepak Chetty, suggested to start making the scenes and that the story ideas can often come up while creating things. This advice was very helpful because, otherwise, I might just have procrastinated trying to come up with a story and not actually worked on any shots.

One thing I was sure about is that I wanted to make a cinematic that moved my audience.

So, to start with, I grabbed a scene I like from Nomadland as my reference and set up a cine-camera to match the lens used in the movie composition. Then I laid out the shot, drawing from what had been covered in the course material such as landscape and foliage creation. 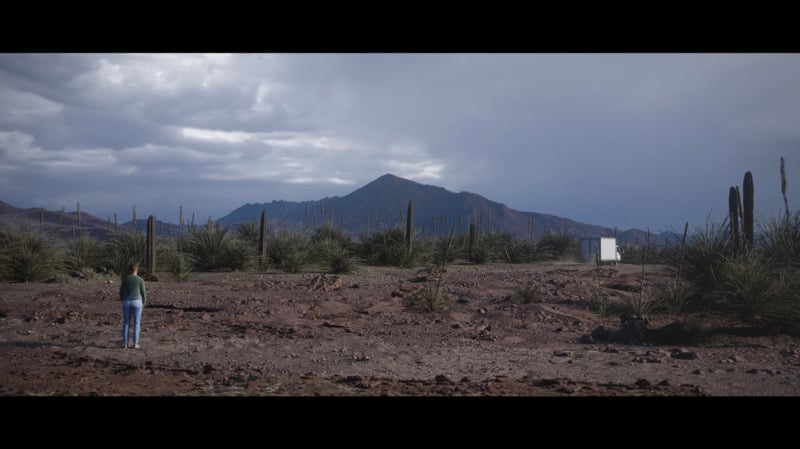 Hanny's version of the desert road scene in Unreal Engine, applying what she learned in the course to create the landscape and foliage.

I started with Gaea for landscape creation, then did the texturing in Unreal Engine. It took a few iterations to make the landscape materials. Once the production began, I had more drive to assemble the scene using the foliage tool and Megascans assets.

The Megascans library became a significant time-saving resource, making it possible for my project to progress within a shorter time period.

Meanwhile, I picked another scene from the movie Paris, Texas — its night lighting had such a strong mood that I wanted to achieve.

Dusky night lighting in Paris, Texas (1984) which Hanny sought to emulate in Naima.

I found some free models from Unreal Engine Marketplace that matched the background of the movie and added those to my scene.

Hanny's adaptation of the Paris, Texas scene in Unreal Engine.

Earlier on in my project, I didn’t think of adding any characters because I was not confident about getting both environment work and character animation finished within the limited time I had.

However, the week we were taught about Metahumans (as part of our course curriculum) triggered my interest in trying out this new aspect of virtual production. I took it as a chance to add human characters as well as a challenge to go through the Metahuman implementation.

Adding Metahumans turned out to be a rewarding learning curve as I was not familiar with the animation workflow in Unreal Engine. The course content helped walk me through pretty much all the steps of Metahuman creation. 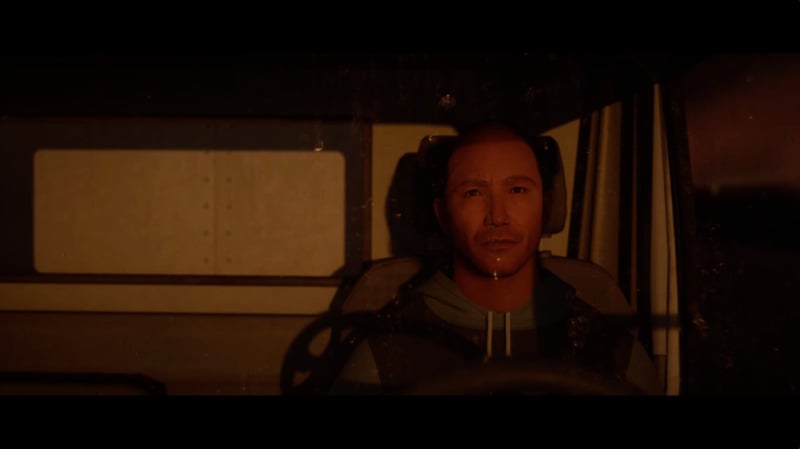 I have been using Unreal Engine for work, but this project was the first time I got to really dive into Unreal Engine 5. The new lighting system, Lumen, in Unreal Engine 5 has the advantage of fully dynamic global illumination and reflections so that I could test certain realistic looks utilizing the powerful engine. Phonebooth scene from Paris, Texas that inspired some of the lighting, color, and grading for Naima

In the beginning, I was relying on Unreal Engine's real-time viewport, but the look and colors were still lacking a bit of oomph. Luckily, included at the end of our course material were William Faucher’s videos on using Davinci Resolve to color grade which helped me to increase Naima's cinematic look.

I wanted to implement as many steps of virtual production as possible into my project. So, I used the last post-production steps to tweak some contrasts and colors. 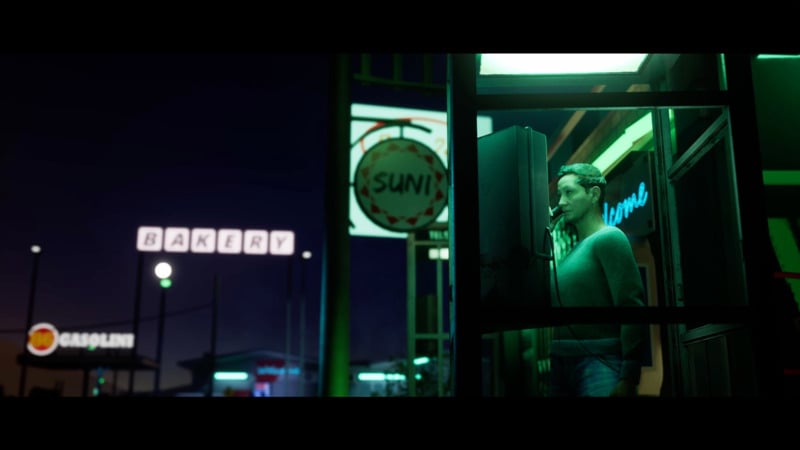 Scene from Naima, after adding Metahumans, lighting, and color grading.

Overcoming hurdles with support from the CGS community

There were many moments when I thought it would be impossible to finish what I wanted to create. In the second last week of the course, my landscape shot was crashing all the time when I tried to render it in Sequencer (never render only until the last moment!). My computer specs don’t include the latest fancy graphic card or the biggest RAM space. So handling a full landscape with high-resolution Megascan foliage mesh was painful.

My Technical Assistant, Marc, helped to calm me down and pointed out how certain assets could be done in a smarter and cheaper way without sacrificing the visual quality.

It took me two days to go through all the assets in the scene. I almost wanted to cry (with joy) when the rendering frames could finally move without the screen freezing.

Another example of a hurdle I overcame was when I spent a whole week trying to make Livelink work with my phone to create Metahuman facial animation. My computer just wouldn’t register the phone, and time was running out. But right before I gave up, I found a couple of basic facial animations in Epic’s The Matrix Awakens project. That completely saved my shots. Working with limited resources and time is necessary for gaining some emergency situation experience.

The Unreal Connectors: Virtual Production program was an intense journey as I was working full-time during the day. And every day during the week, we would have one-hour zoom meetups during the evening in my time zone. In the beginning, I missed the after-work social life a bit as my classes would be from 8:00-9:00pm but after a couple of weeks, it surprisingly became my daily routine.

The biggest challenge would be later towards the last month of the course when I had to deal with moving to another country while working during the day, studying at night, and creating for the project any chance I had in between. Time management was not easy for sure but sometimes I just had to push it, like pulling some all-nighters (I don't recommend it, lol!).

The value of guidance from industry experts

Having an industry mentor’s guidance was such a valuable part of the course. As class sizes were small, we had more time to ask questions. Everyday zoom meetings were pretty much tailored to what we wanted to talk about, so it was an organic way of mentorship.

All of our mentors and TAs have their strengths and focus on different virtual production aspects, helping to cover more areas of learning.

Our mentors work with virtual production tools daily as part of their jobs, so it was very beneficial when we had any technical questions; they had the answers right away or the next day.

Not only the technical problem-solving but the artistic insight from these mentors was really valuable. Especially having an expert second pair of eyes for spotting what works and what doesn’t.

My mentors' intuitive feedback and advice—which comes from years of industry experience—encouraged me to go for more challenging shots.

To be honest, our daily meetings became a routine that would push me to make stuff so I could gain more valuable feedback from the mentors.

The classes were much more helpful when we were prepared with questions. New ideas would pop up constantly during our interactions. Towards the end, I wish this would continue as there is so much to learn from the mentors.

Since graduating, I plan on making more personal projects! The course was such a good motivator for me. I want to carry on the creative momentum that I gained from this learning journey. Active learning is very rewarding and motivating.

Where to find Hanny

To see more of Hanny's work, check out her Vimeo, and follow her on LinkedIn and Instagram.

Enroll now and see what you can create in only 12 weeks!