They talked us through Unreal Marketplace from the perspective of both creators and buyers. Clinton and Carl also provided plenty of practical and worthwhile reasons for uploading and selling your content on Unreal Engine Marketplace.

Unreal Engine Marketplace was launched in 2014, offering free and paid assets including props, sets, and environments. Since that time it’s hosted 3,000 sellers and seen over 10,000 products sold. Their scope is broad and also covers code plugins, rigs, and sound effects, to name only a few!

Clinton listed his first asset — an office scene — in 2015 to test the waters. Soon he started making an income from his assets, and from there, art outsource studio Dekogon Studios was born.

Carl has been using assets from Unreal Engine Marketplace since 2016. He has created some incredible environments using UEM assets to dress his sets, some of which are explored in the webinar.

You’d be surprised by just how many ways the assets on Unreal Engine Marketplace are used. Clinton has seen many industries engage with his content including healthcare, medical, architecture, film, television, and VR sims. NASCAR even took one of Clinton’s virtual racing track assets for a spin!

Another way assets are frequently applied is during the early stages of development, or prototype phases, in game production. Ready-made assets allow game developers an opportunity to play around with different systems at the start of the pipeline. Set-up time for a new game can take months, so with easily downloadable, functioning assets, developers and artists can test the new pipeline without waiting for upstream teams such as the art department.

Other artists commonly use UEM assets to practice their skill set. For example, lighting artists can benefit from wielding quality props and sets to light, meaning they get to spend more time lighting and less time creating or even tweaking the assets themselves. Other artists download assets out of curiosity and to take apart modular sets and see how everything was put together.

During the webinar, Carl showed us around a virtual bedroom he built inspired by the film Summer of ‘84. He used props from Dekogon to dress the set which saved him considerable time. All that was left to build were the window frames, the architecture (walls, etc.), posters, and stickers. This allowed him more time to pay attention to detail, animate some of the props, and play around with lighting.

Surveying Carl’s 80s-inspired bedroom, the prop assets distributed throughout the 3D space helped set the scene and tell a clear story. Carl said when creating sets he is often inspired by the props themselves. 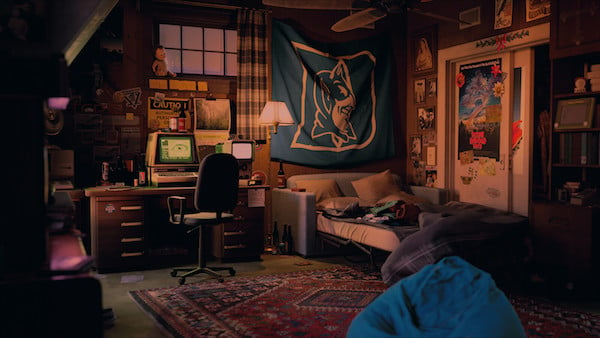 There are a lot of great reasons to become an Unreal Engine Marketplace seller. Clinton and Carl went through a handful of them:

1. Get exposure for your art

If you’re honing your skills and creating great assets anyway, Unreal Marketplace can mean your work doesn’t just sit on your hard drive doing nothing and taking up space. It’s an excellent opportunity to share your work with the world and see it applied in unique and interesting ways.

If you are producing quality content, Unreal engine Marketplace can become a valid source of income. Getting paid to do something you love? That’s living the dream!

3. Showcase your skills to potential employers and collaborators

If companies and other artists download your assets and enjoy using them, this can lead to more work and enriching collaborations. Clinton and Carl both admitted looking up artists after seeing assets they liked on Unreal Engine Marketplace.

Unreal Marketplace can also assist in overcoming that giant first hurdle — breaking into the film and gaming industry. Sharing assets you made is more than just a showreel. Your content isn’t just eyeballed and admired, it’s downloaded and used. People have a chance to examine the quality of your work. For example, if you make an asset and place the pivot out in the middle of nowhere and a buyer tries to place that asset, they will get frustrated and won’t purchase your assets in the future.

4. Stay ahead of trends and technologies

VFX artists, particularly in the gaming industry, can be working on the same project for months or even years at a time. You’re creating all this great work, but you can’t share it with the world (just yet).

It also means you aren’t getting an opportunity to explore new tools or styles in your work. Creating assets for Unreal Marketplace offers you a break from your job and a chance to try new techniques and styles. The best part is that you are learning as you create and, if it’s good enough, you might even receive compensation for your time.

Just like Carl and Clinton! If people like your work they can get in touch with you. It can be the start of a friendship or even a creative collaboration.

6. Become a better artist (and team player) by considering the end-user

Creating content for real-world application makes you consider the end-user more carefully — is your asset broken down neatly and optimized (etc.)? Accountability is a crucial skill to own in the film industry, with downstream departments dependent on your work and team mindset.

Through accountability, you evolve from being a ‘regular’ artist to a commercial artist. The more you consider the end-user, the more valuable your content.

How to get inspiration for asset package themes

When it comes to making art sometimes half the battle is coming up with an idea. When you are trying to profit from your art choosing the right theme can become even more difficult. Luckily, Clinton and Carl have some handy tips on what to consider when creating asset packages. 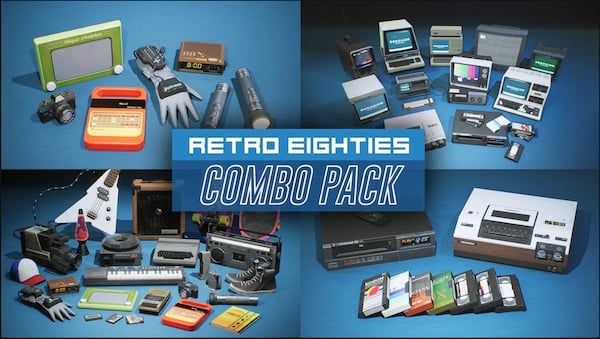 Keeping up to date with the latest trends in VFX and games is a great place to start. Video games in particular require a significant amount of assets. Think of what games or films are popular right now, then work on assets you imagine living in these worlds. What recurrent themes have you seen in recently released video games? Do they all have a military theme? Are they post-apocalyptic (hello, most awarded game in history, The Last of Us!)?

Once you have a rough idea of what is trending it’s essential to observe the Unreal Engine Marketplace and determine where the gaps lie while avoiding the already saturated areas.

It’s also worth considering what someone else in the pipeline will want to use. For example, what content would a lighting artist want to light to showcase their skills more effectively?

Just as Carl finds inspiration in Clinton’s assets, Clinton often comes up with new ideas for content by exploring Carl’s scenes. He advises checking out how other people are using assets to better understand the ways assets get used and why. Scenes often inspire a story that can translate into a whole new asset pack!

What kind of assets sells best on Unreal Engine Marketplace?

In Clinton’s experience, the best-sellers are medieval, military, medical packs, and environments, partly because they are administered across more than one industry.

Content that is relevant and can serve more than one purpose sells well. If you create a bespoke cyber gun you will have less likelihood of selling it because it’s less versatile.

Assets using up-to-date technology are also preferable to buyers. If you have older assets on Unreal Engine Marketplace keep in mind that tech is constantly evolving, so at some point, you may need to update your assets. 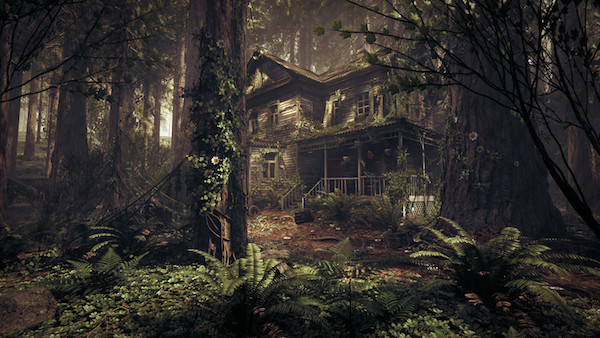 Another significant factor for a well-selling asset is if it’s made with the end-user in mind. When making your assets for Unreal Engine Marketplace ask yourself the following questions:

If this list is a bit daunting, don’t worry, Unreal Engine Marketplace implements a verification process before you can upload content to the site. Their checks are thorough, and the UEM team will come back to you with things you need to alter or update in case you missed something. There is also a handy breakdown on the Epic Games website you can check out. 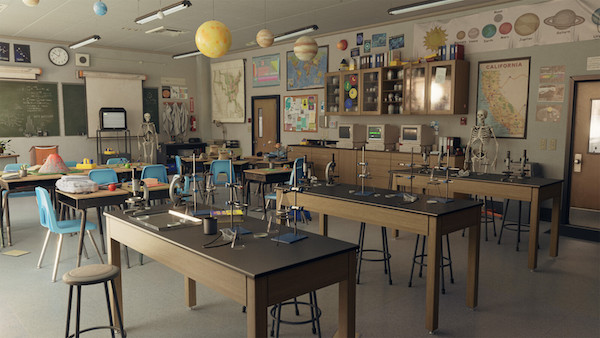 How much time should you spend creating Unreal Engine Marketplace content?

How much time you put into creating content for UEM depends on the complexity of what you’re making. That is the great thing about the marketplace is how much time you invest is totally up to you!

If you’re creating props, keep in mind minimum content is about 8-10 items per pack.

How to get your work noticed

Clinton and Carl suggest posting your work on Discord and Facebook groups. Anywhere you can share your work, do it! Share it as your art but also as a commodity. Some other artists will want to buy your work to see how you went about making it.

Does work go through a bidding process?

There is a verification process before you can upload it to the site. They are thorough and will come back to you with things you need to alter or update.

What to look for when buying assets on Unreal Engine Marketplace

If you found this webinar useful, check out part 2. Carl will show you how he uses assets from the marketplace to create his scenes (see his work) while Clinton will give pro tips on how to properly package, price, and sell your assets.

Want to learn how to create professional 3D assets for films & games?

If you want to sell your content on Unreal Engine Marketplace, consider expanding your technical skills with one of our 3D modeling courses. We offer several great courses for all experience levels. Classes are virtual, students receive mentorships from industry professionals such as Clinton and Carl, and class sizes remain small to ensure highly personalized instruction. There's no better way to get industry-ready than with an industry expert as your guide.