The primary creative roles in game development are that of the artist and the designer. But what is the difference between game art and game design? We unpack the differences to help you determine which career path suits you best.

The difference between game art and game design largely lies in each artist’s role and responsibilities. A game artist helps to deliver the look and feel of a game, in essence, a support role to the process. On the other hand, a game designer acts as the main driver behind the creative and project management process in the production of a video game.

A traditional board game is a useful analogy to describe not only the differences between game art and game design but also to look at how they work together.

Consider the classic game of chess. A game artist would be responsible for designing how the board and chess pieces look (for aesthetic purposes but also for practicality, such as knowing which pieces are yours are which belong to your opponent), while a game designer would be responsible for determining how those move around the checkered board, and how they interact with/compete against each other.

An example of game art for the video game Bloodstained by Jay Burns. 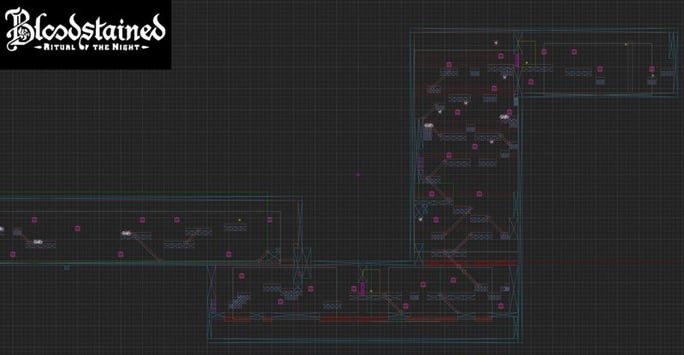 An example of game (level) design for the video game, Bloodstained. Level design by CGS game design mentor Nicolas Najm. To see more of his work, check out Nicolas' ArtStation.

What is a Game Artist?

A game artist works on the visuals of the game from sketch to final 2D or 3D animation. They are given a brief from the designer about the mood, look, and feel of the game, and their task is to realize them visually and help bring the world of the game to life.

It is the role of the artist to tell the story through the visual language of the game. This begins with rudimentary drawings and prototypes of the characters, objects, and environments—known as assets—that will make up the world of the game. The next steps are to render these assets to their final versions. Characters are brought to life via 3D modeling, which fleshes out the movements, mannerisms, and tracking of the characters as they move through the world of the game.

Game artists are tasked with producing a library of 3D assets that will be used to populate the various levels of the game. Curating and cataloging these resources is an important function of the production process and continues through to the support phase. Game artists are also responsible for storyboarding, visually mapping out the game, and illustrating how it will play out on a functioning level. Artists will have their eye on continuity throughout the course of the production to ensure that visuals are consistent and believable within the realm of the game.

Working as a game artist involves being part of close-knit teams which can vary in size based on the scope of the project. They work closely with developers and designers who guide them through the process. There are long hours, tight deadlines, and many revisions involved in getting a game out the door. But the rewards can be satisfying and can propel your career trajectory into ever-more exciting work.

The areas in which you can specialize include character artist, environmental artist, concept artist, particle effects artist, art director, and digital illustrator. There are some cross-overs in these roles, and you might be performing a combination of these functions during the course of your working life. Magic: The Gathering x Dungeons & Dragons card game art by CGS grad, April Prime. A trading card game illustrator is another job you could pursue if you were to become a game artist.

What is a Game Designer?

A Game designer is the main player in the creation of a game. They will have a substantial creative and managerial hand in its production, and, depending on the size of the team, they may write the narrative structure of the game along with plotting the mechanics of how the game is played.

Game design involves working closely with all the key departments of game dev, from programmers to artists to quality assurance to marketing and distribution. They will take on a role similar to a producer—scheduling, budgeting, and overseeing all elements of the production process—basically driving the production to completion. This is a unique and vital role that requires both creative, technical, and project management skills.

On the creative side, game designers will contribute to the storyline of the game, guide the visual style, and design the scenarios and levels of the game. They will work with game artists to ensure that the vision of the game is realized and keep artist teams working to the right brief, on schedule, and on budget. They will work with programmers to ensure that the creative and technical teams are working in sync to keep production on track.

The user interface, game engagement, and testing will all be analyzed by the game designer during the course of production. This role requires a deep understanding of gameplay and how users will respond and interact with the game. Game designers are focussed on the big picture of how the product will be played and the effect it will have on players.

The creation and delivery of a game depend heavily on the designer having exceptional creative, technical, and gaming skills, as well as excellent communication.

The job description of a game designer can differ slightly depending on the size and type of a project and the studio. Typically, as games become more complex and teams become larger, some of the traditional roles of a game designer are separated out into specializations, such as a level designer and/or systems designer. Level designers focus on creating and implementing levels, environments, stories, and quests, while systems designers focus on designing and then implementing the minute-to-minute gameplay systems which make the game fun like controls, movement, and combat.

Game artist or game designer: which job is right for you?

Now that you know the difference between game art and game design, want to power up your skills in the video game industry?

Whether you want to pursue game art or game design, CG Spectrum's game development courses will ensure you're headed in the right direction towards your career goals.

All courses are led by an industry expert in your chosen field who will mentor you every step of the way, helping you to build the skills that will get you hired in video games. And our unique online learning model means that you can study from anywhere in the world. Press start on your career in games—enroll today!