Virtual production is revolutionizing the filmmaking process and more and more film and television productions are relying on its workflows which offer filmmakers greater control over when and how they envisage a scene. This increased interest is seeing new creative and innovative roles for real-time artists emerge throughout all stages of production.

In this article, we’ll explore the virtual production process in more detail, looking at a typical workflow and how it relates to the role of a real-time 3D artist.

Where are virtual production workflows used?

Virtual production is a collaborative process that marries the physical world of filmmaking (actors, props, etc.) with the digital world (lighting, VFX, etc.) in one process using real-time technology.

Virtual production workflows and techniques are commonly employed in: 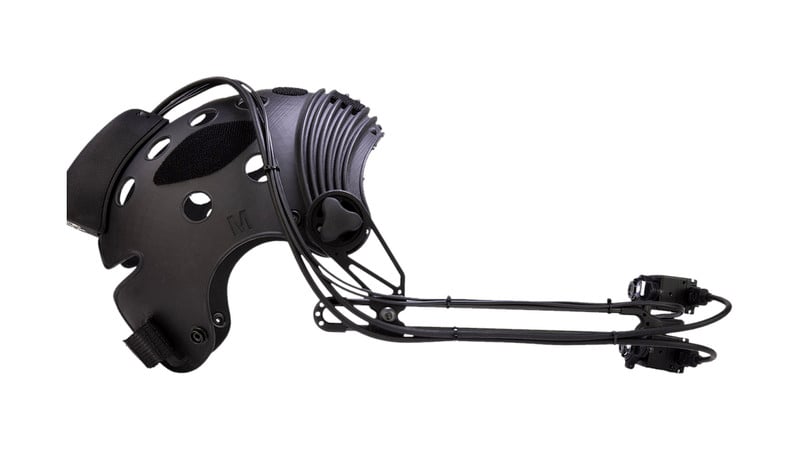 What is a virtual production workflow?

At first glance, a virtual production workflow looks more complicated than a traditional one. However, while it may have more steps, it’s actually much more efficient and artist-friendly. 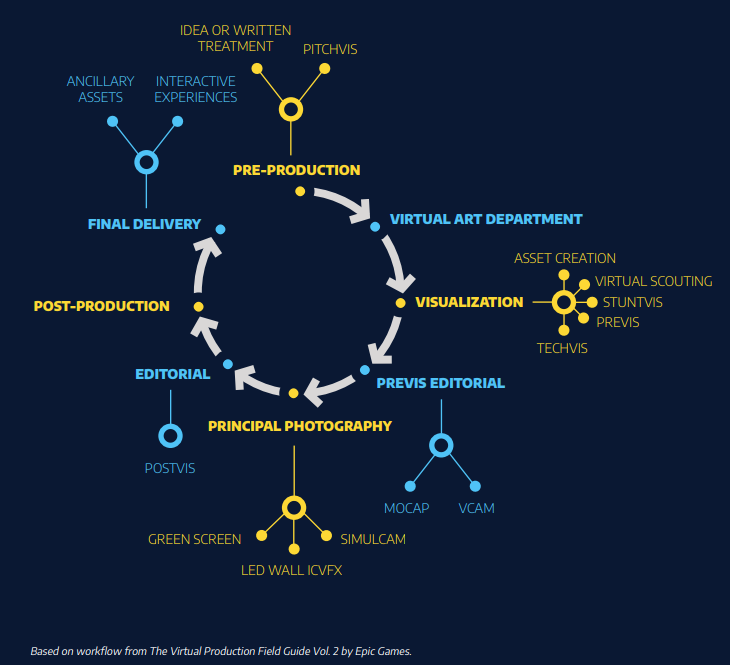 Here are (some of) the simplified steps of a typical virtual production workflow including what is required of a real-time 3D artist:

1. Pre-production (Development) - This is when the idea for the film or TV series is first visualized for approval from investors, producers, and studios. Real-time 3D artists convey the story and tone of a production by creating digital scenes known as pitchvis (like a preliminary trailer), visualizing the filmmakers’ creative intent. Pitchviz has been effective in greenlighting Hollywood blockbusters such as Godzilla (2014), Men in Black 3, and World War Z.

Pitchvis for World War Z, which secured the film's funding.

2. Virtual Art Department (VAD) - The virtual art department begins creating real-time assets that will be used in a film, from rough 3D prototypes to camera-ready props, characters, and environments. This team helps determine which assets will be built digitally as part of the virtual world and displayed on the Volume, which will be live-action props and set pieces, and which assets will need to be created in post-production (at a VFX studio). The VAD works very closely with previs artists and visual effects teams to ensure the production’s priorities are met and that principal photography and other stages go smoothly.

There is a difference on the set when we’re shooting virtual assets that look good. Everybody gets excited, and people take it more seriously and put more work into every single shot.”
Ben Grossmann, Oscar and Emmy Award-winning Visual Effects Supervisor

3. Visualization - Filmmakers are generally most familiar with this part of the virtual production workflow. Real-time 3D artists generate digital imagery using a game engine to convey a filmmaker's vision of a sequence or a shot.

There are several types of visualizations used in virtual production workflows, including:

Example of Aquaman previs vs. the final shot (Image: WarnerMedia)

4. Principal Photography (Production) - This is when your virtual worlds will be projected on LED screens surrounding actors, props, and smaller set pieces in the foreground.

The LED screens that make up The Volume generate more realistic lighting and reflections, minimizing the need for large, complicated lighting set-ups on set. Camera tracking technology then adjusts the virtual scene behind the actor based on the live-action cameras, creating parallax (helping the virtual world and the physical world appear to exist in the same space).

The making of Aquaman and the many ways virtual production was used during the principal photography — from previs to motion capture to LED screens (also demonstrating the non-linear nature and versatility of virtual production).

During post-production, if any placeholders were used during filming (like using human stand-ins for digitally-created animals or creatures), VFX artists, like 3D modelers, FX artists, and compositors, would create, integrate, and render these elements into the final footage.

Postvis is another form of visualization used during post-production and often involves integrating the live-action footage with rough VFX. Its design is similar to previs but is used more for editorial as shot placeholders (until a more final version can be added to the cut) after filming has already taken place. It is also used to brief VFX teams on the timings, staging, etc., of a full or partial CG shot.

6. Final delivery - Once all team members have completed their parts, the final version of the film is rendered and delivered to audiences to enjoy!

The virtual production workflow is more front-loaded for real-time teams, with more asset creation and VFX work happening before and during principal photography. Virtual production provides more creative flexibility earlier in the filmmaking process and produces a much higher end-product. Its non-linear, more collaborative steps allow for greater flexibility and opportunities. Here are a few ways virtual production differs and is more advantageous than traditional filmmaking:

Read more about the top reasons to choose virtual production for filmmaking.

What jobs can I get in virtual production as a real-time 3D artist?

“Technical artists are one of the most overlooked skillsets when it comes to almost any real-time production. The opportunities within this space are still largely untapped.”

Learn more about virtual production workflows and prepare yourself for a career as a real-time artist.

To find out more about the diverse and cutting-edge opportunities available for real-time artists in virtual production, download our Virtual Production Career Guide.