What does a film real-time 3D artist do?

Real-time artists create interactive 3D content and assets that are rendered in real-time. They often work on a project from concept to completion, collaborating with filmmakers to realize a broader vision. Real-time artists are also responsible for maintaining visuals in both quality and optimization—from entire environments down to small 3D props, known as assets. real-time artists also add lighting, and create textures.

Real-time 3D artists are often generalists who collaborate with other artists, designers, and programmers to realize a broader vision, commonly known as virtual production. 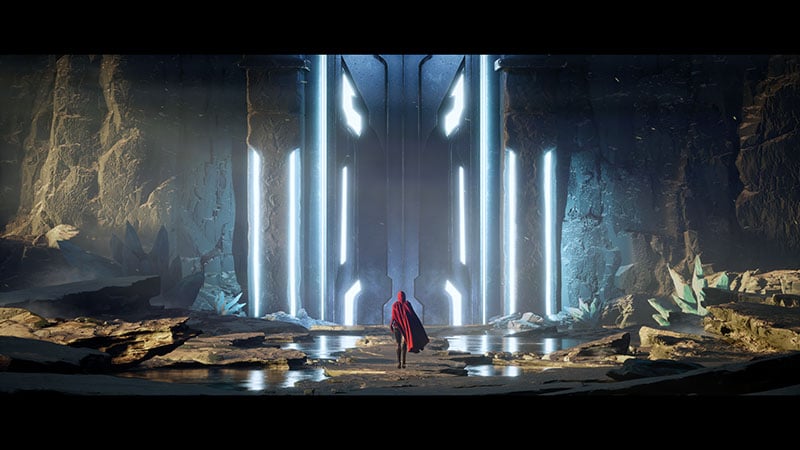 Virtual production is analogous to traditional production. The main difference is that renders occur in real-time. Real-time is paving new, improved workflows for the film industry and bridging some gaps in the traditional production pipeline, allowing real-world and digital platforms to converge. It’s been adopted as a tool by filmmakers and content creators to visualize what they’d usually only be able to view in post-production at the pre-production and production stages.

The LED volume is possibly the most recognized use of virtual production methods. A wall of LEDs (light-emitting diodes) display a real-time rendered 3D virtual environment that curves around physical sets, actors, and props. Through live camera tracking, the virtual camera within the game engine moves to match the physical on-set camera, shifting what’s displayed on the LED wall, like a shift in perspective. This synchrony between camera and imagery creates parallax, helping to create the illusion that the real and virtual elements reside in the same space. Lucasfilm’s The Mandalorian is a well-known example of a production that used virtual production on set.

Real-time artists focus on content or asset creation in a real-time environment such as a game engine, often working on a project from concept to completion. They are also responsible for maintaining visuals in both quality and optimization — from entire environments down to small 3D props, known as assets.

Role & responsibilities of a real-time artist in virtual production for film and TV:

When starting in this competitive field, you’ll need to focus on learning technical tools and be proficient in a game engine such as Unreal or Unity, which often also involves some coding.

Film studios may look for the following skills in a real-time artist for film:

What software and tools do real-time 3D artists use?

When starting out in this competitive field, you’ll need to focus on learning a real-time game engine, but the importance of art fundamentals cannot be underestimated. However, because real-time artists often take on a more generalist role, there’s plenty of other software that’s worth learning too.

Real-time artists may need knowledge of a combination of the following software:

How much does a film real-time artist working in virtual production make?

The national average salary of a real-time 3D artist is $62,053 per year in the United States. (Source: Glassdoor)

Begin your journey with expert mentorship from top real-time 3D and virtual production experts! Courses include personalized feedback from your industry mentor, small class sizes, and access to our vibrant online community.

A 12-week virtual production intensive for media professionals and studios looking to up-skill their teams and foster the next generation of real-time artists.