Gerel: Against The Corvus Empire - a pixel art video game by CGS grads

When Alan Robinson studied the Nuke Compositing Course at CG Spectrum, he not only acquired the skills to build a successful career in VFX, he also gained access to the school’s global online community filled with talented students, alumni, and mentors studying and working in film and games—something that would continue to foster his creative pursuits years after completing his studies.

After graduating, and a successful career working as a compositor on blockbuster films and TV series, including The Irishman, Spider-man: No Way Home, and The Righteous Gemstones, Alan was ready for a new challenge. He decided to start his own indie game development studio, Overwrite Interactive, and create a video game from scratch.

For Alan's video game to come to fruition, he needed a team of capable artists to help him. CG Spectrum’s thriving online community, with over a thousand weekly active members, was the perfect place for Alan to cast his net and find the right artists with the right skills. Through this unique online network, Alan connected with Advanced Concept Art Course graduate Dogyeong (Do) Lee and Game Design Course graduate Alexios Vasilakis who both joined the Overwrite Interactive team.

Being part of the CGS online community facilitated access to alumni and students across a number of disciplines. It’s a great way to find talented and enthusiastic folks to help out on projects. -Alan R

We caught up with Alan, Do, and Alexios, to hear more about Gerel: Against the Corvus Empire—a recent recipient of an Epic MegaGrant—their contribution to the project and the benefits of working in a global team. The Epic MegaGrant allowed Alan to bring on some key team members for a production push.

About Gerel: Against the Corvus Empire

Currently in production, Gerel: Against the Corvus Empire is a 2D pixel art side-scrolling platformer with Metroidvania elements. The story’s hero, Gerel, is a widowed mother who sets off on a perilous adventure to save her kidnapped children from the evil clutches of the Corvus Empire.

To introduce Gerel to viewers/players, Alan, Dogyeong, and Joona (another team member) recently worked together to produce an evocative cinematic that establishes the events, motivations, and stakes of the characters leading up to the opening level of the game.

Cinematic for Gerel: Against the Corvus Empire produced by Alan, Dogyeong, and Joona. The game's narrative was inspired by the strong women in Alan's life.

The concept arose from a desire to tell a heartfelt story that revolves around a powerful female protagonist and touches on important and relatable themes of struggle, loss, and redemption. -Alan R

Operating as Gerel, players will explore the whimsical land of Muur, meet some of the quaint and quirky locals, battle enemies using melee combat, and unlock new areas by solving puzzles on a quest to reclaim her children.

Gerel battling enemies. The team updated the game earlier this year to include health bars.

The game received an Epic MegaGrant in March, which helped Alan purchase some of the software required to create the cinematic. Alan's advice for applying for an Epic MegaGrant is to have a playable build. He also recommends keeping your application details as up-to-date as possible during the application period and maintaining good communication, via email, with the MegaGrants team regarding those updates (without spamming them).

Living in the United Arab Emirates, Alan started Overwrite Interactive in May 2020 amidst the COVID pandemic. Much of what he learned while studying at CG Spectrum—both hard and soft skills—was transferable to his new pursuit in games, including compositing the shots for the game’s cinematic using Nuke Indie.

[My mentors] set great examples and have helped me further my understanding of project organization, problem-solving, working with other artists, and the creative process in general. -Alan R

In October, CG Spectrum graduate Dogyeong joined from the US as Concept Artist, creating the looks for the game’s characters, environments, and props. She was also responsible for the cover art and all the illustrated frames in the game’s opening cinematic.

Do has been lovingly and skillfully crafting the whole world and all the characters of Gerel: Against The Corvus Empire in her wonderful, unique illustrative style. -Alan R

Dogyeong was given a brief and some reference images for each task which she used to create variations of sketches. Once a version was selected and approved, Do would refine the images on paper (adding turnarounds, movements, parts, etc.) for the pixel artist to use as a base.

Studying at CG Spectrum helped me to know what a team expects from a concept artist. I learned to work with a brief, gather as much reference as possible, and create concept sheets for other team members to use as a guide when building the game. —Dogyeong L

Game Designer and second CG Spectrum recruit, Alexios, joined the team from Greece in February this year. Since then, has helped build out design documentation and made quality additions to the game’s overall design. Alexios focuses primarily on level design and layout, working from the ideation stage to the iteration stage and then engine implementation. 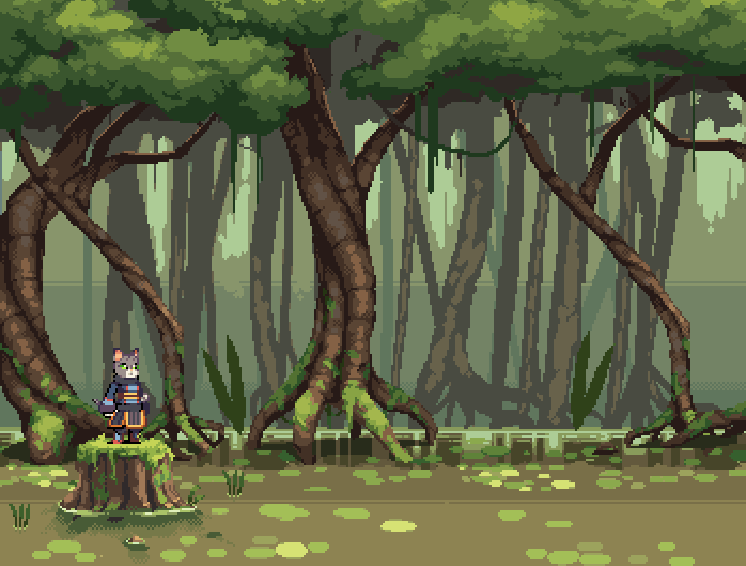 One of the levels in Gerel: Against the Corvus Empire.

One thing Alexios found useful in his role was finding and playing other games that had similar aspects to Gerel: Against The Corvus Empire. He’d deconstruct those games in order to better understand the genre he was working on and the elements within it. Alexios did this as part of his research stage, a vital component of starting any new game dev project.

During my time at CGS, I learned how to learn—how to pursue knowledge. Knowing how to manage this can help a lot both in terms of time and confidence. -Alexios V 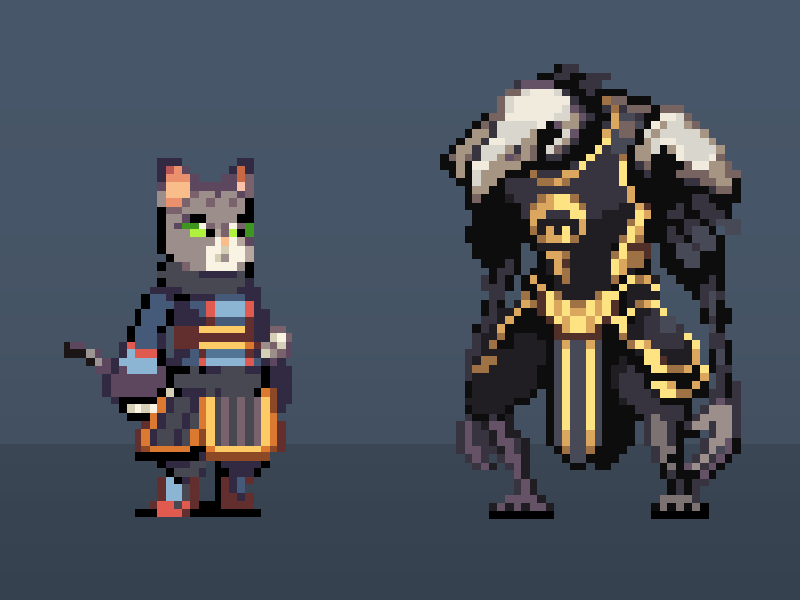 Hailing from all over the globe, the game development team on Gerel: Against the Corvus Empire requires excellent communication to work effectively across continents and time zones. Their primary tools for communication are Discord for more basic day-to-day discussions and Google Meet for the occasional video chat. For organization, project management, and production pushes the team uses a mix of Trello and Monday.com, and Google Sheets for documentation.

In terms of the game itself, Alan and Alexios use GitHub to keep track of the different branches during development. Unreal Engine is their engine of choice for building the game, which is used alongside WWise for SFX and music and GitHub for source control.

Like any team, a global team isn’t without its challenges. Alan’s main advice is to exercise patience and be as clear as possible with communications. He also says to remember to check in with team members and see how they’re doing. All sorts of unforeseen things can happen in team members’ lives and it's vital to remain patient, supportive, and flexible.

To keep up-to-date on the latest developments for Gerel: Against the Corvus Empire, follow the game's progress on Steam. You can also get updates by following Overwrite Interactive on Twitter, Instagram, YouTube, and LinkedIn.

Want to study at a training center where your lessons extend beyond an industry-approved curriculum?

By enrolling at CG Spectrum, you are joining thousands of like-minded creatives who are eager to share knowledge and learn from one another, collaborate on projects, and encourage each other as you all progress in your career in film and games!