These questions, and more, were answered in CG Spectrum's recent webinar How to become a Real-time 3D Artist (scroll down for the replay). Featuring real-time mentors William Faucher (Real-time TD and Unreal Artist), Deepak Chetty (Epic Games Unreal Online Learning Producer - Film/TV/Virtual Production Track), and Simon Warwick (Department Head of Foundations), these experts delve into why real-time artists are highly sought after, real-world examples of how real-time virtual production is currently used, and the skills you need to become a real-time 3D artist.

What is a real-time 3D artist?

A Real-time 3D Artist harnesses traditional skills found in one or more areas of the production pipeline, focusing on content or asset creation in a real-time environment such as a game engine. The basic skill sets are the same, but the media varies from real-time to non-real-time production.

Unreal Engine is the most commonly used program used by real-time artists. The physical accuracy of settings and values is built-in to the software, accommodating a natural transition into the virtual world.

Unreal Engine is certainly at the forefront of virtual production at the moment, there isn’t a single other engine that can even come close to competing with what Unreal offers. -William Faucher

Virtual production is analogous to traditional production. The main difference is that renders occur in real-time. Virtual production allows real-world and digital platforms to converge, meaning digital revisions and/or additions can develop alongside any physical changes. Its real-time capabilities are considered one of the most important innovations since digital cinematography replaced analog film cameras.

The democratization of real-time software has recently brought virtual production into the spotlight, but it’s actually been around for a while. Virtual production is probably most well-known for its role on the set of Disney’s The Mandalorian. 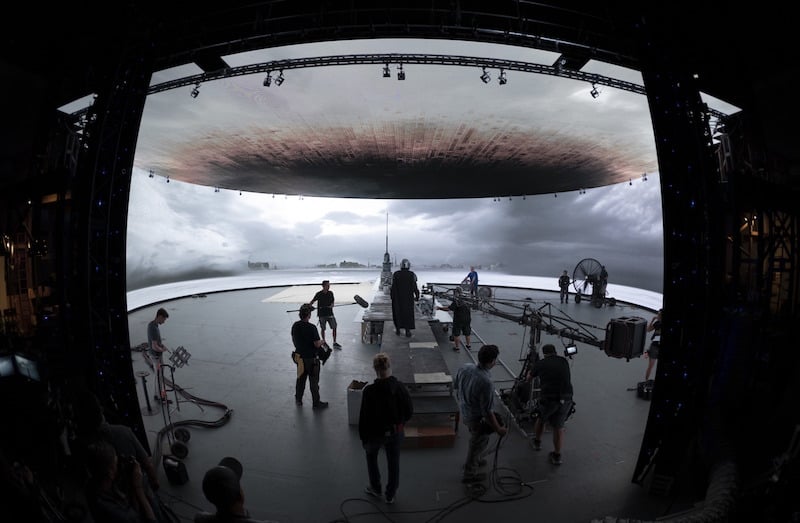 How is real-time being used?

Real-time is paving new, improved workflows for the film and online games industries, and bridging some of the gaps found in a traditional production pipeline. It’s been adopted as a tool by filmmakers and content creators to visualize at the pre and production stages what they’d usually only be able to view in post.

On large-scale productions live real-time virtual sets are displayed on LED screens. These virtual backdrops with interactive lighting replace the traditional green screens, helping to contextually immerse the talent within a setting and rendering them in final pixels.

Real-time also aids in expediting the concept art stage. With access to ready-made assets and lighting set-ups, content creators are now able to mock up a proof of concept within a few hours — something previously unheard of in this line of work!

Outside of film and online games, real-time is applied across a range of industries for a variety of reasons such as:

The main difference between virtual and traditional production workflows is that virtual production encourages more nonlinear and collaborative processes, largely due to its capacity to render in real-time.

Virtual production’s non-linear workflow has created some exciting opportunities for real-time artists and content creation, including:

Is Unreal Engine difficult to learn?

If you want to be a real-time 3D artist and work in virtual production, learning Unreal Engine is important, even for established filmmakers.

The good news is that, according to the experts, the learning curve is not too steep when it comes to navigating some of Unreal Engine’s basics, like the layout. There are dozens of free Unreal Engine courses through the Unreal Online Learning platform. For more personalized career training and mentorship from an established real-time artist, CG Spectrum’s Introduction to Real-time 3D & Virtual Production is a great place to start. The even better news? You don’t necessarily need VFX experience to get started!

Here are the three most common challenges aspiring real-time artists face when starting out with Unreal Engine:

Mentor William Faucher believes that until another worthy competitor comes along to rival it, learning Unreal Engine is integral if you want to become a real-time 3D artist and work in virtual production.

Get started learning how to operate the software today by downloading Unreal Engine for free!

Is there a demand for real-time artists in films and games?

Real-time artists are sought after right now, making it a very exciting time to get into virtual production. Here are some reasons to consider becoming a real-time 3D artist and why this role is currently in demand:

What skills does a real-time artist need?

To be a successful real-time 3D artist, it’s worthwhile broadening your skillset beyond a solid understanding of Unreal Engine. The mentors suggested brushing up on the following skills:

How to get started as a real-time artist?

There are four easy steps to start your journey towards becoming a real-time technical artist:

Deepak also suggests watching more films and saturating yourself with content. Try to view them analytically. Pause shots you like and try and work out how they were produced. Be inspired!

Next steps: if you’re serious about starting a career as a real-time 3D technical artist, consider a formal real-time course such as the Real-time 3D Technical Art & Virtual Production Course, taught by industry professionals like William and Deepak using Unreal Engine.

There is a HUGE demand for Unreal Engine artists and with UE5 right around the corner, now’s the time to get as big of a head start as possible. -William Faucher

Want to work in virtual production and create awesome content as a 3D real-time artist?

If you want to become a real-time artist, check out CG Spectrum's Real-time 3D & Virtual Production Course. The course teaches you world-building and how to operate virtual cameras, rigs, lights, and humans to create a compelling scene for your portfolio. Your experienced mentors will also demonstrate how to apply these skills in the real world, ensuring you hit the ground running at your first virtual production job!