Lead designer and game design course mentor Heath Smith has more than a decade of experience in the AAA video game industry. Heath's worked at Activision, Square Enix and Eidos-Montreal on titles like The Amazing Spider-Man and the Tomb Raider franchise. He’s interviewed, hired and led teams, and knows what it takes to become a great game designer.

If you want to learn how to build really great games, here are 5 things he recommends you start working on today.

1. Play and deconstruct a variety of games

To become a game designer, you need to shift your mindset from playing for fun and getting lost in the experience, to deconstructing games and understanding how they work.

It’s hard initially because great video games suck you in with compelling narratives, gameplay loops, imagery, sound and experiences. They’re good at hooking you and making you forget that you’re actually playing.

The next time you play your favorite games, do it with a critical eye. Analyze while you’re playing. Can spot the gameplay systems being used? Why do you think certain choices were made?

If you want to be a well-rounded designer, play a wide variety of genres, don’t just stick to the ones you like best.

As a game designer you’re not designing for yourself, you’re designing for an audience. You have to get into the head of the player, understand what motivates them, what makes them tick, and design the game for them.

You might love strategy or role-playing games, but have no interest in social games on mobile. Well, there happen to be a lot of game design jobs in that area. So make sure you’re playing everything to understand what it is that makes each game so successful and why millions of people around the world are playing it.

Occasionally your favorite genre and the game you’re working on might intersect, which is a wonderful experience. But often that’s not the case, so make sure you play a lot of games, a variety of genres, and deconstruct them as you go. 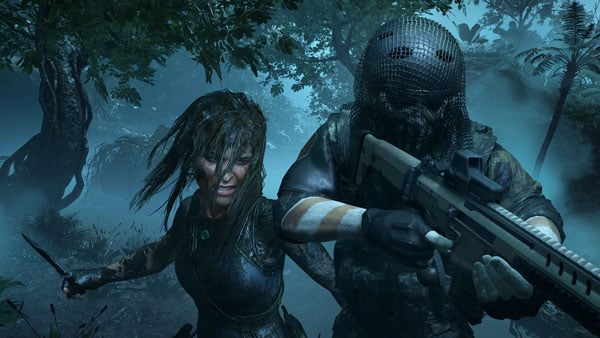 As lead game designer on Shadow Of The Tomb Raider, Heath was in charge of bringing the concept of fear into combat and adding more puzzles and social experiences. Read about other initiatives he championed. (Image: Square Enix)

It's simple: if you want to get a job in game design, make video games!

If you’re applying for game jobs and you haven’t made any games, the recruiters might question if you’re really that passionate or why you want to get into this industry.

Not only working on your own projects show your passion, you’ll also understand what the game development process is all about.

It’s never been easier to make a video game. When I was starting out, you had to program everything yourself and there weren’t really any free game engines. Now you can download Unreal or Unity, and start building. There are lots of resources on the internet showing how to make a basic video game. You no doubt have a ton of ideas you want to try out.

If you’re just starting out and making a full video game seems a bit daunting, download a level editor and make a level for a game you like. Analyze what makes your level fun or not fun. I used to make levels for Doom back in the day.

Your first game might be terrible, and that’s OK! You don’t need to start with the ultimate video game you’ve always dreamed of making. Start with something small and achievable. Show you can create something and finish it.

It’s actually hard to make a simple game. It’s very easy to make a complicated one. You might be working on a game and think it’s not that fun, so you add something else in there to make it more fun, and it’s still not that fun, so you add another thing, and it’s still not fun. Guess what? If you keep adding in more things, it’s probably not going to become more fun.

A reputable game design course taught by an industry mentor is the best investment you can make. Being self-taught requires a lot of motivation, whereas a course gives you structure and deadlines, and forces you to work on your game.

While it’s possible to get a game design job without a degree or diploma, it may take longer. If you’ve been building prototype after prototype, but have no idea why things are or are not working, you may still end up designing a great product, but it will likely be harder and take longer without a solid foundation to build from.

Take a course to learn game design fundamentals and understand how to design a game from start to finish. Learn how to communicate your vision and turn it into a monetizable product.

If you want more career options, find a course that teaches all aspects of game design, including level and systems design. When you’re applying for entry level jobs, you may not know if you’ll be designing systems, levels, or both.

Some studios will expect you to do everything, while others will have you only designing levels or systems. The job description will give you some idea, but requirements vary between studios, so best to be prepared.

Even if you know you want to specialize in one type of design, knowing what the other roles do will help you create more usable work. For example, a level designer needs to know what a systems designer does in order to create levels that work well with systems. And vice versa. A systems designer that doesn’t know anything about how to make levels, won’t make good systems. They’ll be thinking about how great their system is, meanwhile, the level designer can’t use it.

When I left high school, the profession of 'game designer' wasn't formally defined yet. There were career pathways for game programmers and game artists, but game design was considered a bit of a 'black art' you learned on the job. So I enrolled in a game development course (which was programming at that time, since there were no game design courses!).

The course forced me to focus and expanded my knowledge beyond what I could glean from just playing games and having ideas.

I was paired with industry pros who shared real life anecdotes to prepare me for the industry and taught real world skills, not just theory. It was money well spent.

4. Work on your communication skills

There's plenty of information on the hard skills you need, but certain soft skills should not be overlooked. Communication is one of these skills. Half of a game designer's job is listening and communicating the vision of the project to those around them.

A good game designer is rarely at their desk. They're constantly walking around, talking to people, giving feedback, getting people on the same page, and working through problems.

Do your research and work on improving your own communication skills. Understand how you communicate with others and how they communicate with you; learn about different personality types; and practice being a good listener.

People often think becoming a lead game designer means being the boss and telling everyone what to do. That is not the case. In fact, as you go up the ladder, you relinquish control.

Being a lead means being an excellent communicator and making sure everyone understands the game's vision.

You will build a better product if you can communicate your vision to your team, and they love it and get on board. Your job is to help them feel empowered to collaborate and contribute their ideas. Good ideas can come from anywhere. And the more you let the team design the game while you act like a filter, the better the game will be.

A good leader inspires and guides their team. If your team is not coming back to you with great ideas, there are two reasons: either you haven’t been communicating the vision well enough, or you’re not listening.

5. Research your favorite games and creators

Learn from people who have come before you. There are countless articles and talks online with game creators talking very openly about what they were trying to achieve, and what went wrong or right.

Games are often a collaboration with hundreds of people, and decisions are sometimes made because of limited time or resources. So Google post-mortems and watch GDC talks on YouTube to find out what the developers were intending, or why they made certain choices. You can get a really good idea of their thought process. Gamasutra (which also posts video game jobs) is another great resource full of interviews and articles.

One other tip is to Google the games you love and check out the names of the designers in the credits. Look them up to see if they have a blog, or a portfolio or website for you to learn from.

Doing your research will help you better analyze and deconstruct games, and help you become a better game designer.

CG Spectrum game design school is the place to get 1-on-1 mentorship from talented industry mentors like Heath. Learn how to turn your ideas into fully playable games for others to enjoy. Enroll now and turn your passion into a career!