How to Get Hired in Game Dev with Senior Game Designer, Daniel Pinch

Justin checks in with his former student, Daniel Pinch, a Senior Game Designer at Airship Syndicate and Game Design Mentor at CG Spectrum. They talk about what qualities made Daniel stand out and succeed as a student, how to create an impressive game design portfolio, the skills Daniel looks for when hiring people, and finding a work-life balance.

This episode is chock-full of real-life examples from Daniel’s own experience, going full circle from student to getting a job in game design to mentor!

Daniel has more than seven years of industry experience, specializing in systems, gameplay, and AI design. He's shipped titles for Xbox, PlayStation, iOS, Android, and Oculus Rift, including World of Tanks, Damaged Core, They Live to Destroy, and the Heroes Reborn franchise.

Right now, Daniel's focus is on creating outstanding gameplay events for a new (unannounced) game at Airship Syndicate, and is a mentor for the Game Design Course at CGS. 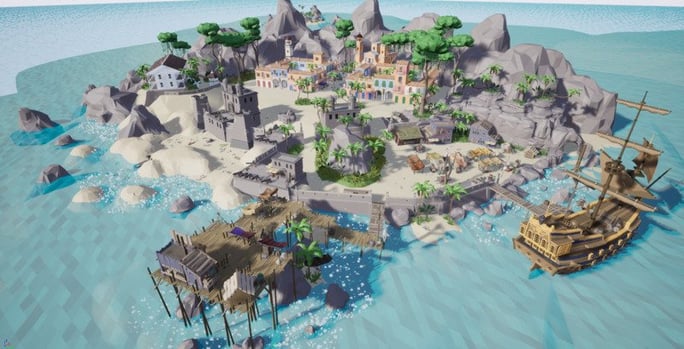 Still from "High Seas" — a Sea of Thieves-inspired level design exercise that Daniel will eventually turn into a full prototype for a pirate game! He picked up a pirate art pack from Synty Studios and dove straight into creating unique and interesting islands for players to explore.

Wargaming's World of Tanks which Daniel worked on as a Senior Game Designer.

For more information, visit Daniel's website and LinkedIn. You can also watch him do game dev on Twitch.

JUSTIN MOHLMAN: Justin is a CG Spectrum mentor, Game Development Producer and Author at Epic Games, and active Creative Director for The Rookies. Over the past 2 decades, Justin has helped bring dozens of games to life while at studios like Disney Interactive, Robomondo, Midway Games, and Phosphor Studios. Credits include franchises like Tony Hawk, Kingdom Hearts and Mortal Kombat.

DNEG Lead Hard Surface Modeler David Cunningham (Snowpiercer, Enola Holmes, Moonfall) chats to Maxine about how he got into 3D modeling, the bold steps he took ...

Real-time artist, William Faucher meets with Justin to discuss the art of teaching (on his popular YouTube channel and as a CG Spectrum mentor), and lessons ...