Lauren Wakley is one of our 2016 season scholarship students studying Concept Design here at CG Spectrum. We have all enjoyed watching her skills develop and expand over the year.

Lauren's concepts and ideas stem from her love of everything fantasy. From fire-breathing dragons and harpies to creatures of the deep and the pirates they pester, Lauren's work is never dull and is always bright and exciting.

Our Head of Concept Art Brandon Reimchen he had nothing but great things to say about her.

"What can I say about Lauren? Lauren was an ideal student. She exuded innate professionalism with her punctuality and studious nature. She wasn't afraid to ask questions when she needed clarification and seemed confident with the advanced course material. I think Lauren will enjoy a long and fruitful career as a concept artist and/or illustrator as she seems to have a desire to continue learning and growing as an artist."

We got a chance to sit down with Lauren and ask her about what inspires her, how she goes about coming up with concepts and overcoming problems.

What character do you love drawing the most?

I really love designing medieval fantasy style characters but I try and aim for a more broad range for my portfolio (and I am terrified of Sci-fi!).

What got you into concept art?

I grew up watching cartoons, movies and playing video games and I was always interested in the way the characters looked. So I started drawing the characters that I liked and eventually began coming up with my own, I loved Lord of the Rings and World of Warcraft so everything was inspired by that.
As a kid, I didn't even know what concept art was and I don't think I ever really understood what a Concept Artist did until I began studying with CG Spectrum. I had just thought concept art was drawing a cool character in a cool pose, but there's so much more to it. Over the course of this year I've found a whole new passion and understanding of concept art.

Lauren's progress through the years

What made you want to study with CG Spectrum?

I had previously studied at a school for 3D modelling and animation, and during that we went through the whole process of concepting a character, modelling, rigging, animating, lighting and compositing it. Out of the whole process I enjoyed concepting the most but out of a 2-year course, only about 2 weeks were dedicated to concept art. CG Spectrum offered the opportunity to fully specialize and learn concept art in depth. Plus having mentors who are industry professionals makes a world of difference.

How is CG Spectrum different from other schools?

CG Spectrum is different in multiple ways, one being that it's an online school, meaning I can study from home and have the flexibility to arrange my schedule in a way that works for me.
Getting taught in a small class of 4-5 people has helped so much, to have the opportunity to get individual feedback (compared to being in a class of 30+ and going all gladiator on your classmates to get the teacher for 10 minutes).
[featured]
Being mentored by someone who is an industry professional in your chosen field is the best thing about CG Spectrum in my opinion. My mentor, Brandon Reimchen, really pushed me every week to focus on my weak points and learn as much as I could. When I first started I would design a character and not put a lot of thought into their pose, or clothing, or facial expression etc. My mentor questioned everything which started training me to consider all the choices I make.
For example, if I give a character a sword why do they have a sword? What did they make it out of? What do they use it for? Do they fight in epic battles with it? Do they have it just for show? Do they use it as a fancy way to spread butter? Who knows?!
I learned that you really need to tell everything through your concept, if your character fights in battles then their armor and weapons will need to show that (cracks, scratch marks, bloodstains, dirt).

What's your dream job in the industry?

There's a lot of jobs out there that would be amazing, but I'd love to work on a high fantasy or medieval fantasy style RPG game.

Something that I struggle with a lot is Set Design and Environments. Before studying with CG Spectrum I had never really looked into a set design so it was all new to me when we started learning it.

My first attempt was trying to make a pirate ship cabin just because pirates are cool, the perspective was really odd and didn't have a set horizon line (I was trying to create a leaning back wall and a curved ceiling, I should've focused on getting the basics right first before trying anything like that). 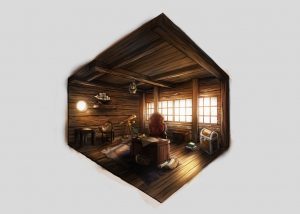 The second attempt I wanted to remake the pirate ship cabin but really focus on making sure the perspective was right, so I stuck with a simple square room just to get the hang of it.

By the third attempt I wanted to try a different setting, that way I could explore texturing different materials (stone, plaster, dirt, plants) so I created a herbalists storeroom. I also wanted to try a multistory set and include a staircase just to push myself out of my comfort zone. 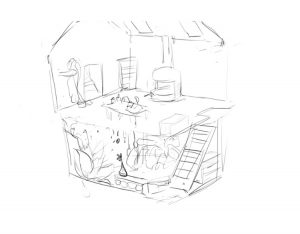 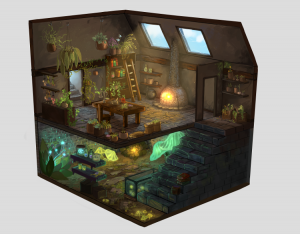 Something that I struggled with was drawing the tiles on the floor, I found that drawing the texture flat and then using the transform tools to try and line it up with the rest of my perspective helped a lot.

If you're interested in starting a career in the film and game industry check out our full offering of courses!