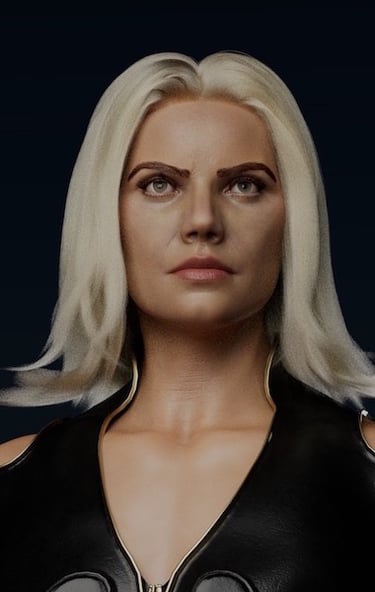 We asked CG Spectrum graduate Massimiliano Moro to walk us through how he created realistic hair and eye elements in his 3D modeled character Anja. He generously shows us his process. How his first iteration was fleshed out and amplified with the skills he gained from completing the Advanced 3D Modeling Course. Let's delve into the glorious complexities of 3D modeling!

Hi everyone. My name is Massimiliano Moro and I graduated in 3D Modeling at CG Spectrum in 2020. I want to introduce my newest character Anja, she's created for use in simple cinematics. 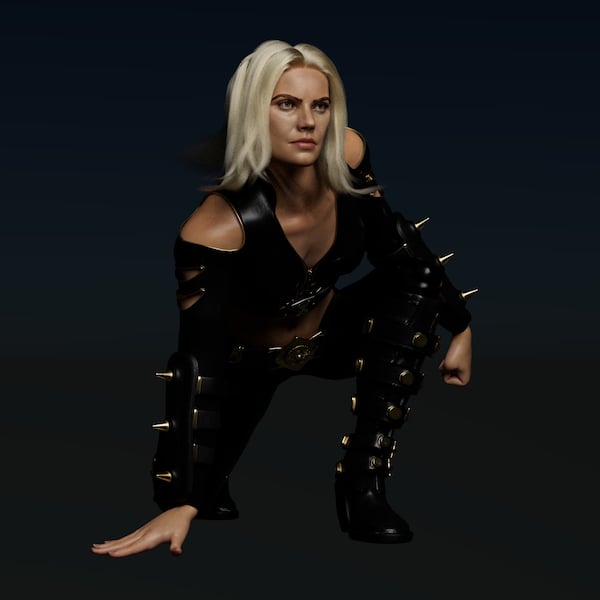 Before proceeding I'd like to make two disclaimers. Firstly, the methods I'm presenting are by no means the best or the only way to approach creating characters for cinematics. This is just the way I do it based on my own experience and personal preferences. There are so many effective workflows developed by artists far better than me, and at the end of the day, you will have to find the workflow that suits you. Secondly, I'm not going to cover aspects of character creation that you may have already discussed with your mentor or that you can find easily online. What follows is a series of tips and tricks I hope you'll find useful.

The idea for this 3D character modeling project originated from a discussion I had with the Career Development Manager Maxine Schnepf. In one meeting she talked extensively about fan art and the importance of being original. Fan art has been a big part of my evolution as an artist, all my projects until now had been inspired by Star Wars, Overwatch, etc. I found replicating or reinterpreting the work of amazing artists was a great way to challenge myself. But I wanted to push myself to develop my own ideas and test my skills. So I decided to invent a new character using ideas I've always nurtured. Of course, in the industry concept artist and character artist are separate careers, but it's common nowadays to find 3D character concept artists.

My dream is to one day to master all aspects of character creation from concept to modeling, to texturing, to rigging. To become a digital puppeteer, so to speak.

Anja is the first in a series of characters I am currently working on. She's the hero in a story I wrote. The inspiration comes from a variety of sources - Alice from Resident Evil, a female version of Snake Plissken from Escape from New York, and many other post-apocalyptic action movies which are a passion of mine. Anja is a female warrior, expert in martial arts and determined to avenge the death of her father caused by the evil monk who is the villain of my story. I didn’t use any particular reference for Anja, I simply tried to create a strong, tough female character. She is purely the product of my imagination. At the same time, she also has a lighter side, as well a sense of humor. As you might have guessed, I particularly like creating female characters even though they pose specific challenges as we will see.

Anatomy is a monster of its own as many of you know. I struggled to achieve good proportions and nice shapes in my models. The good news is that I had my mentor Patrick Delmastro to help me. He always said that mastering anatomy is a never-ending process, it could take years to get decent results. It is easy to get discouraged though. I've included the very first version of Anja I modeled before enrolling in the Advanced 3D Modeling Course at CG Spectrum to show my point. 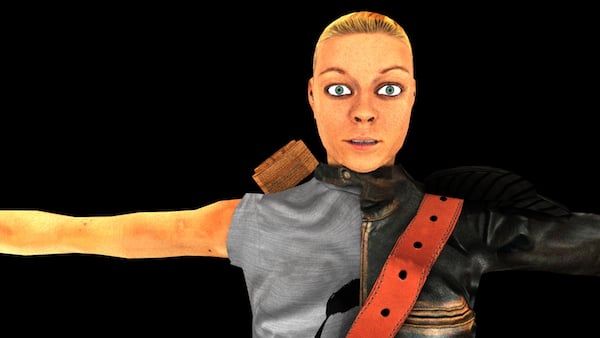 The first version of Anja before Massimiliano did his CG Spectrum course.

Patrick stressed the importance of considering the human body as a layered structure - skin on top of fat, on top of muscle, on top of bone. He introduced me to Ryan Kingslien’s female ecorchè inside Zbrush. It was very helpful to observe the major landmarks in female anatomy. He also taught me that when it comes to female anatomy subtlety is key.

Unless your character is a bodybuilder or is like the Hulk, to be realistic you have to be subtle.

The bony landmarks are the first to be considered. For example, the forearm has a complex muscle structure of flexors and extensors but the underlying bone structure of radius and ulna is even more important in getting it right. These two bones cross each other, determining the basic shape of the forearm.

The ability to emote plays a fundamental role in the creation of a realistic 3D character. That's why the eyes' setup and structure are so important in selling the entire character. The two most important parameters are the distance between the eyeballs and the radius or diameter of the eyeball. For Anja, I used this setup - cornea, iris, caruncle, and lens as different models. The cornea is a quad sphere with a small bulge on top. The most difficult part is to sculpt the iris in Zbrush using Google images. It has a difficult spongy structure made of "little caves". Blue and brown eyes have different structures. 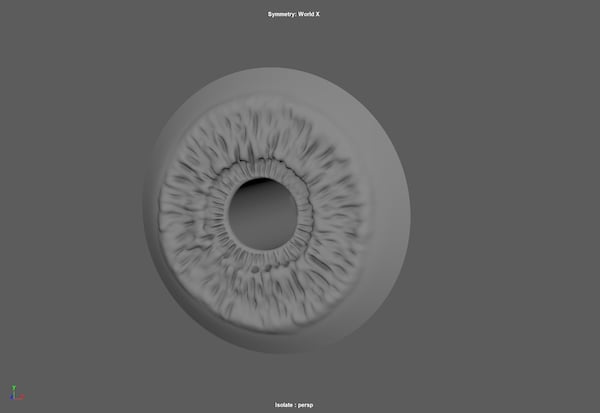 I detailed the skin by hand, so pores and wrinkles are not projected from scans. To get a decent detail I used HD geometry in Zbrush. It is also necessary to have multiple UV tiles or UDIMS. 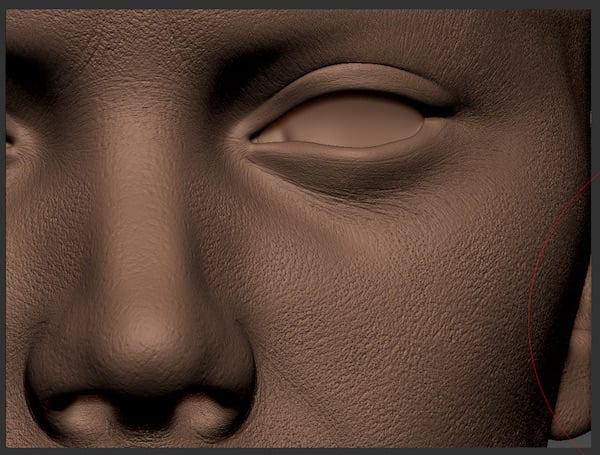 For texturing Anja I used two different approaches: Polypainting on HD geometry for the body and Substance Painter for the clothes. The resolution per tile is 4K.

Another important feature of a realistic character is hair. In this case, I used XGen core to place guides on selected polygons on the scalp, then I converted the guides to curves. 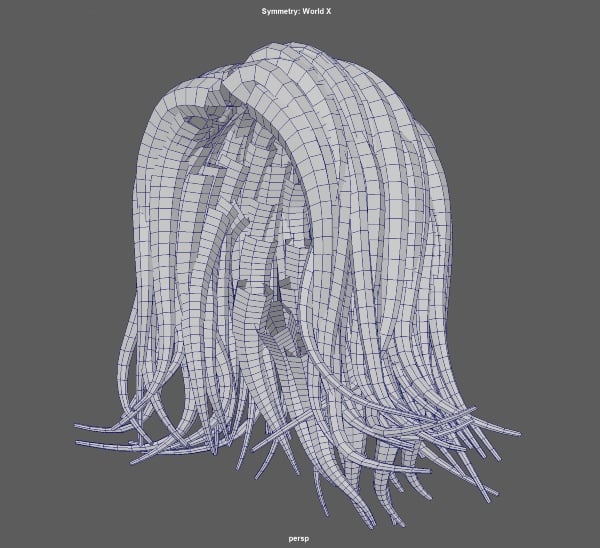 Once you have your curves it is smooth sailing. It is sufficient to use the new feature in Maya 2022 called Sweep Mesh. As a final tweak, you can convert your XGen hair to XGen Interactive Grooming using a variety of brushes.

Rigging a 3D model in Zbrush

Anja’s rig has a classical setup with IK/FK limbs plus facial rigging. I used joints for the eyes and also for the opening of her mouth. The facial expressions are obtained through blend shapes. For simple ones I use the shape editor inside Maya, otherwise I recommend Zbrush recommended. 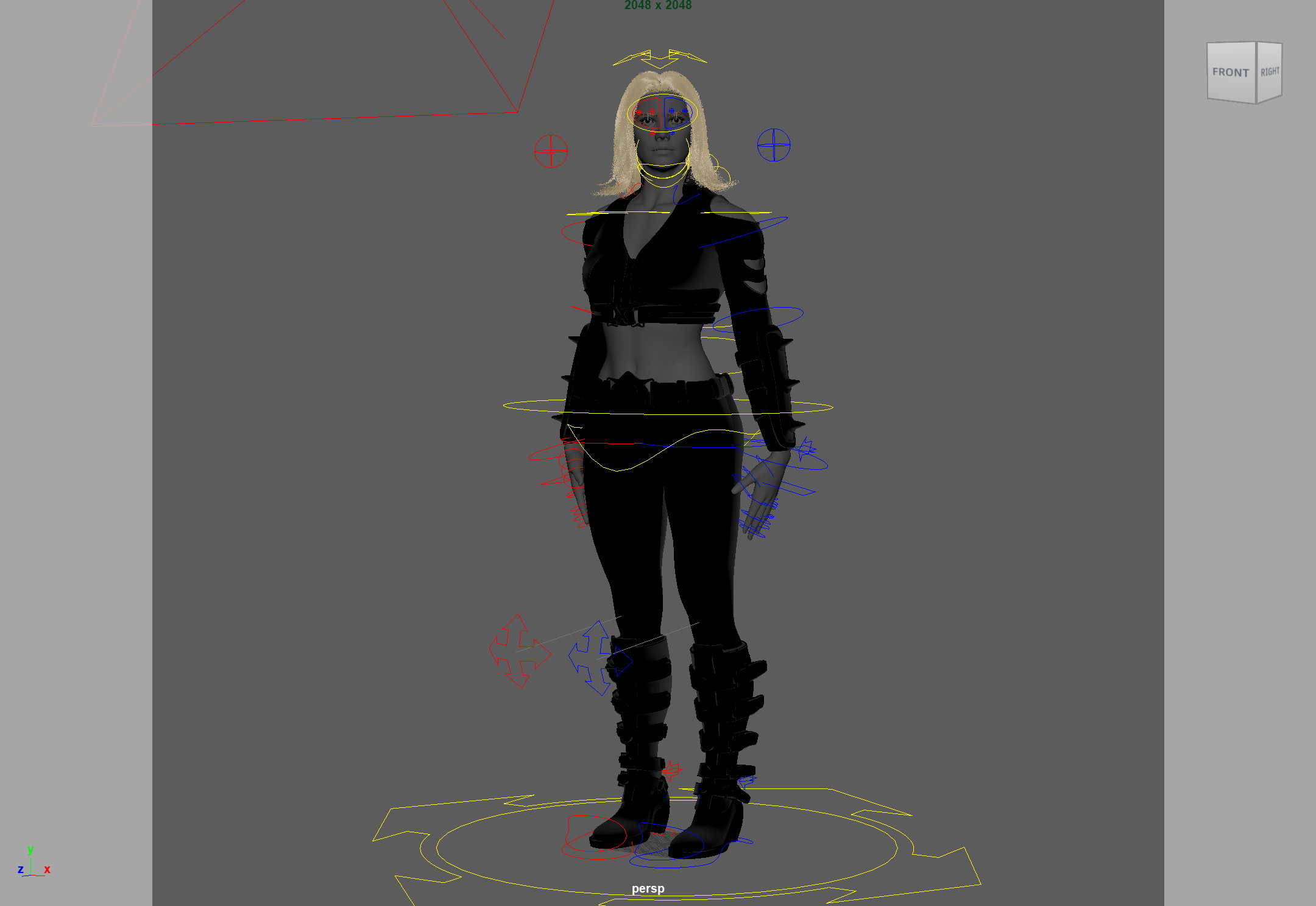 As this a character for cinematics her rig would benefit from more definition in the muscle setup, which I'm still working on. She has a mouth bag containing fully rigged teeth and tongue as well. Her hair is also rigged. Another possible approach is to use Dynamic Hair Rig in Maya. In this particular case, I used the node editor and XGen Interactive Grooming.

Tips for rendering in Arnold Renderer

Arnold is an amazing rendering engine. It captures even the smallest detail you put in your sculpt. It is important to enable auto bump in the displacement attributes.

Here are my render settings: 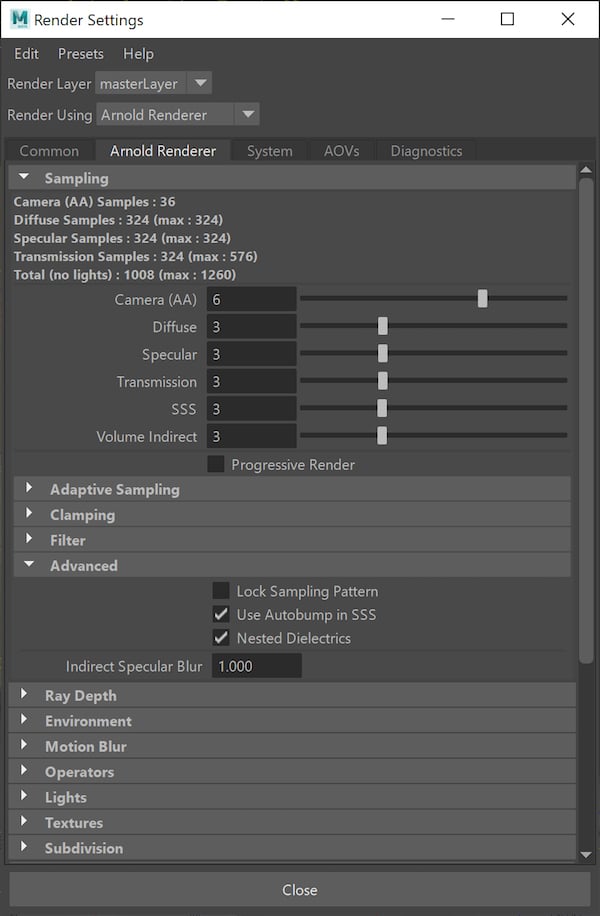 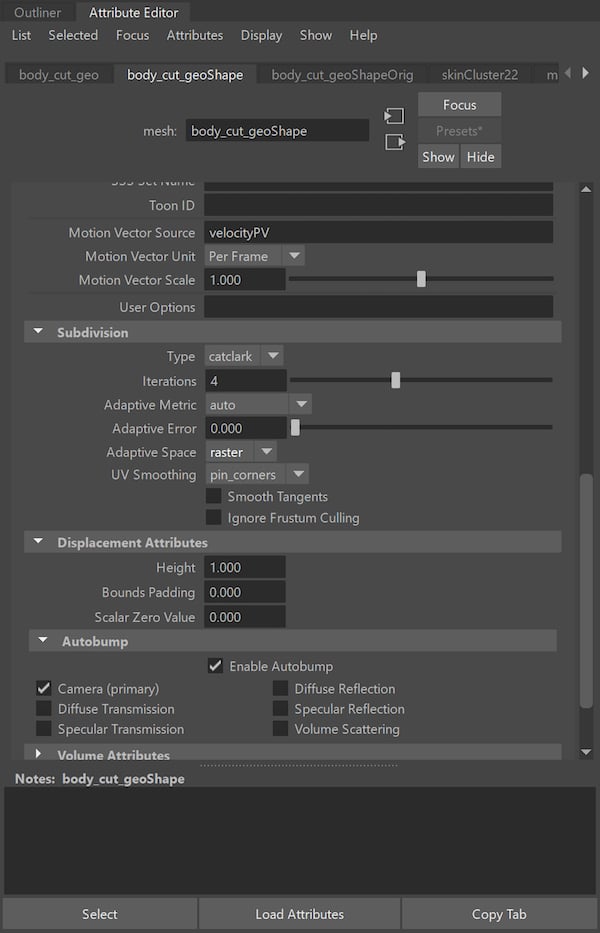 That’s all folks, I hope you are getting something out of this. I also hope to continue to improve my character modeling skills even though I know it is difficult and sometimes it gets frustrating. Thanks for reading and good luck with your studies. 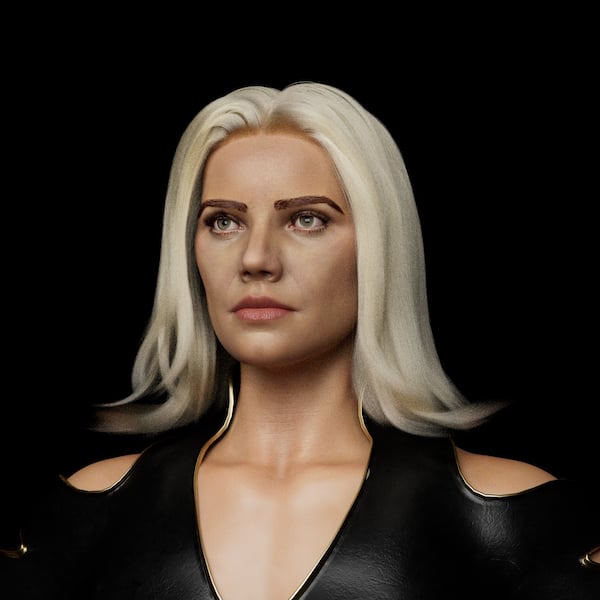 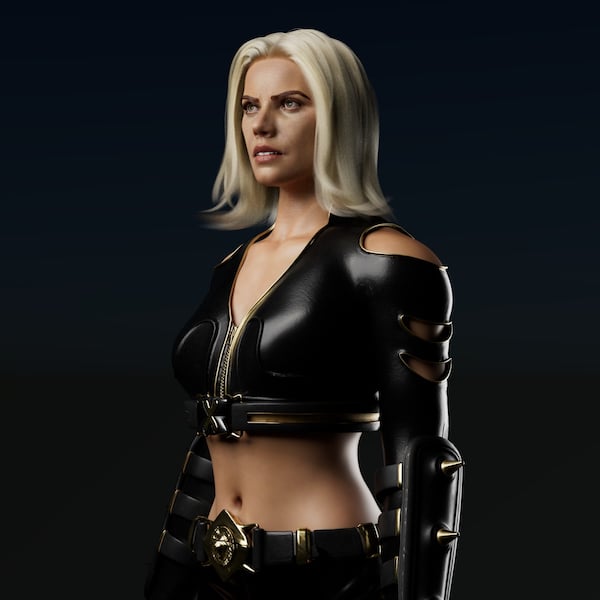 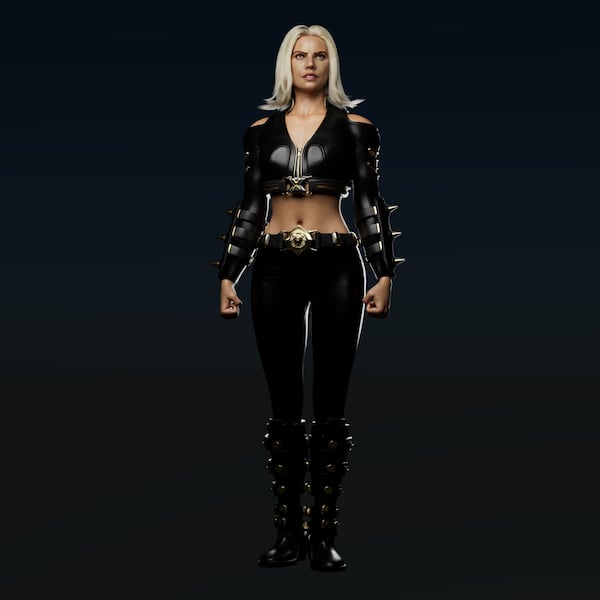 If the challenge of building realistic 3D models appeals to you check out our Advanced 3D Modeling Course. Our mentors will teach you how to construct a character from the bones through to the realistically textured skin, hair and attire. Small online classes ensure you get the personalized training you need to attain the industry-standard skills required to launch your career. Start breathing life into the characters that fill your imagination now!