CG Spectrum recently held a Halloween-inspired art contest giving students and grads a chance to show off their digital painting skills and win a Wacom or Huion tablet. The entries were incredible and it was no easy task narrowing down the winners!

Here's the contest brief and the winning entries. Congratulations to all the winners and everyone who entered! 🎉

The year is 2100. Mega cities have drawn in most of the world's populations after a cataclysmic impact event from a strange glowing asteroid left the world in shambles.

Descriptions of the kingpin are often conflicting and seem exaggerated as they have rarely been seen by anyone in the public. Some say that the horseman grew up close to the irradiated asteroid impact crater and has developed unusual powers. One thing is for sure, The Headless-Horseman sows fear throughout the criminal underground. Anyone that claims to have seen the kingpin is often left in a catatonic state.

Uma Inazuma is the leader of the Juuichidaime Uma Group; one of the current principal clans of the Yakuza, and the most notable. He is known in the criminal underground as the Headless Horseman. No one really knows the kumicho’s true appearance except for his inner circle. Anyone who has seen a glimpse of him is silenced or disposed of. His name was derived from the fleeting silhouette he gave to those lucky enough to escape him. His silhouette was often described without a head.

Donning specialized shoulder-mounted cybernetic arms and a cyborg body, he wields two katanas. His gear is operated through Kuji-kiri. Kuji-kiri is a practice of using hand gestures found in the techniques of Uma-ryu, the clan’s traditional form of ninjutsu. His main katana is sheathed in an electromagnetic linear motor scabbard. It propulses the katana at high velocity when performing his Iaido technique. Due to the immense force propelled, the Iaido technique can only be done using his specialized shoulder-mounted cybernetic arms. His kabuto helmet hovers and is locked above his body by magnetic levitation. It can be released when not in use or need to be handled. 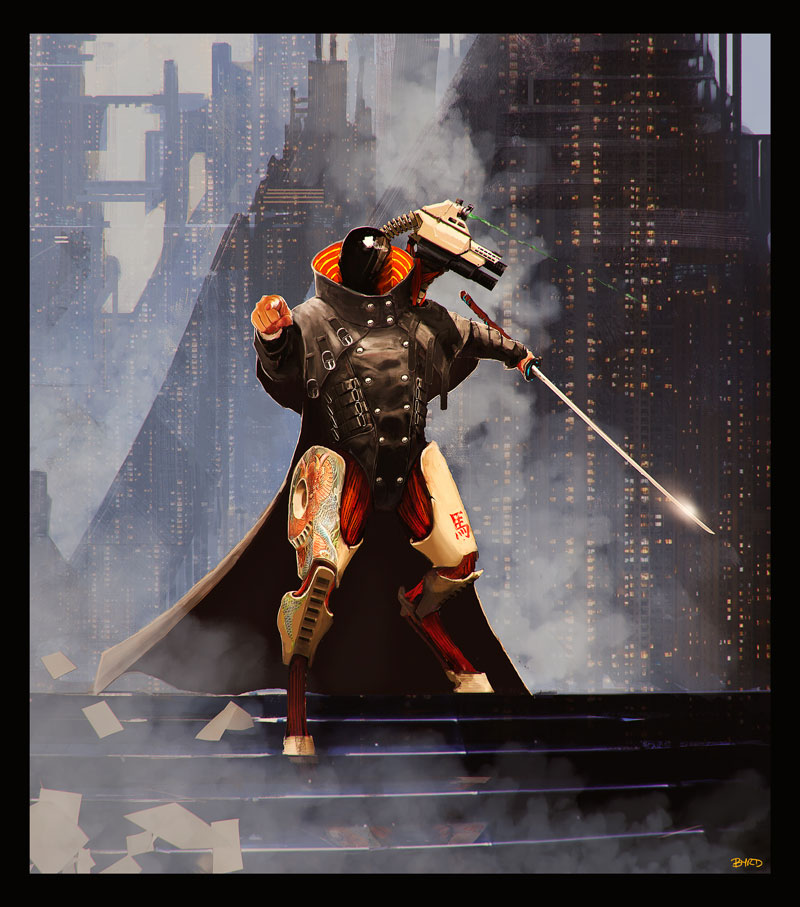 The kingpin began working off-world as a grunt in the Planetary Defense Force until the asteroid hit the Homeworld. He was called back to Earth and tasked with an intelligence-gathering expedition into the crater. At the centre of the Asteroid the strange fluctuating forces and radiation ultimately slaughtered all of the scientific crews who first suffered disfigurement, dismemberment and eventually death. Paralyzed from the waist down the kingpin crawled out as a lone survivor, scavenging synthetic body parts and weaponry from the expedition bots to augment and mobilize himself.

Nursing himself back to health he left the wasteland and travelling to the closest mega city, Spectropolis. The Kingpin quickly establishing his dominance over the mega city by moved into the underground societies and brutally decapitating all the leading members of the three warring crime families. His reputation rippled fear through the criminal underbelly of Spectropolis. Whether due to rambling descriptions of sightings or his brutal killing methods, he has become known as the ‘Headless Horseman’. The Horseman’s face is always hidden beneath a jet black HUD helmet which acts as a targeting system for his shoulder-mounted weapon. 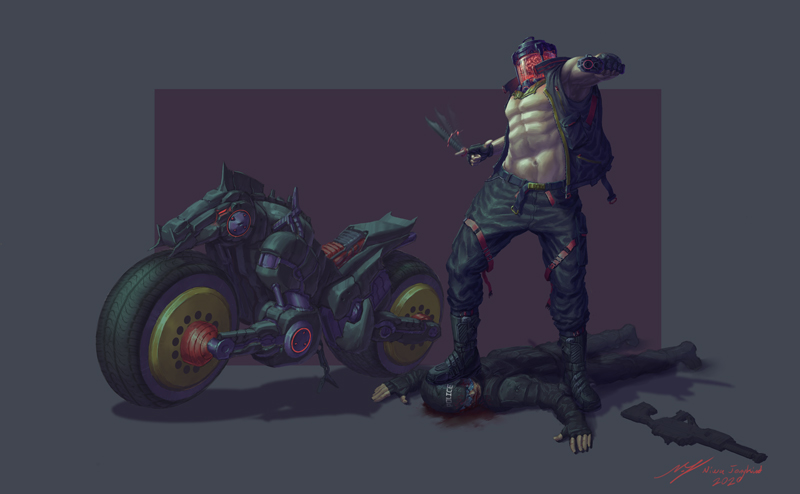 My interpretation of the headless horseman was to still have a living man, but instead of a head, his brain was protected and held within a preservation canister. His horse, a cyberpunk bike with the characteristics of his noble steed. And standing on an officers head, showing his position and status within the city. I started by sketching out different ideas and compositions and then 3D modeled the bike to then paint over in photoshop. Once the character design was complete, showing personality through costume, positions and movement, I added the dark cool-toned lighting to emphasize the halfway between living and dead. 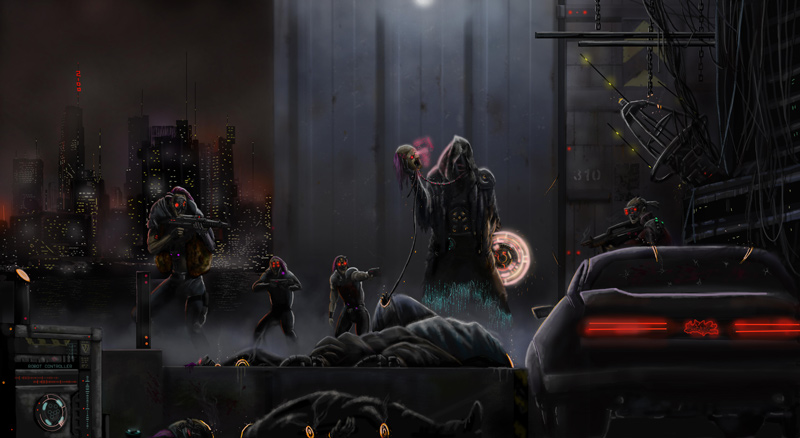 Alastor, also known as the headless horseman, leader of the notorious “Pagan” Gang. Bold and cunning, a mystical cold blood hitman and skilled hacker. Always like to assault and slaughter his rival gangs by surprise with special camouflaged ability and his unique weapon, a flying disc known as “the Guillotine”. Taking his rival leader’s head as a trophy and hack into it for sensitive information which he found valuable in the black market. 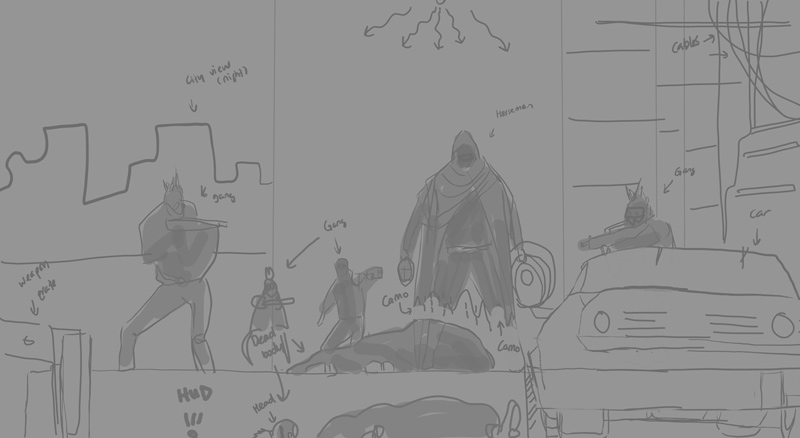 The so-called “Headless-Horseman” from the Spectropolis District was once once a regular member of the "jack-o-lanterns" gang. One day, he sacrificed himself during a rival gang fight, which lead to his decapitation. Luckily, his gang was able to recover his head and body. His brain was then implanted into a mechanical jack-o-lantern. Going forward, he was called the “The Headless-Horseman” and seeks out the rival gang which cut his head off... to return the favor. 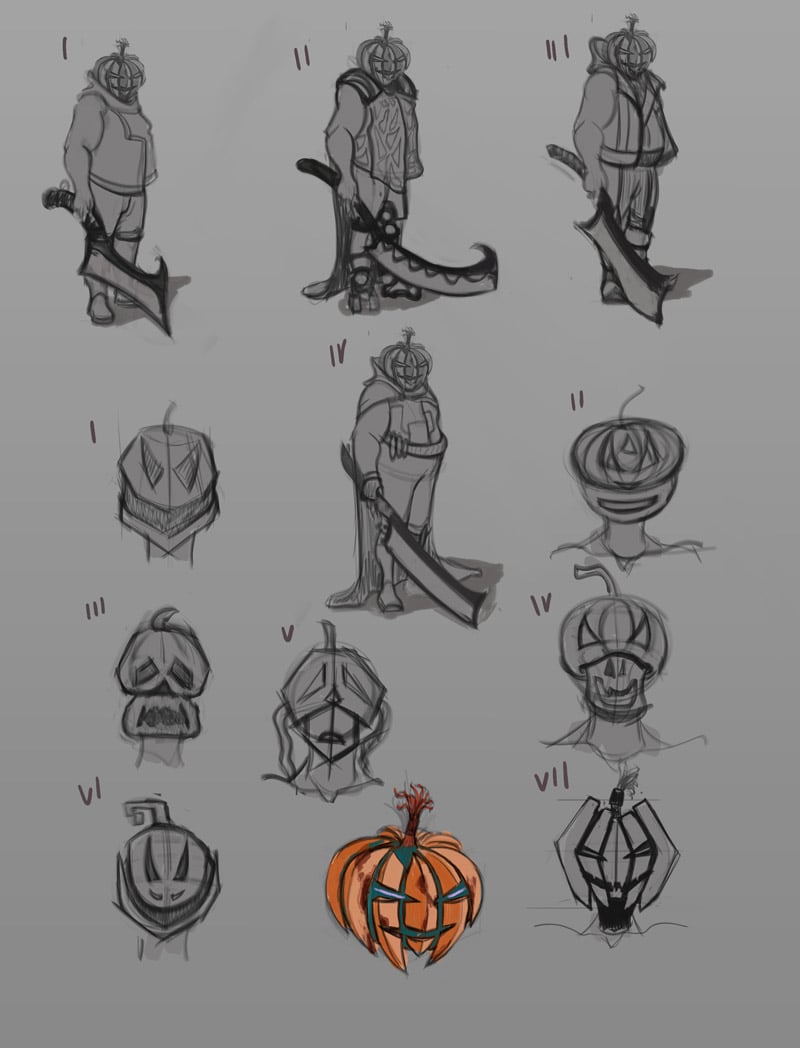 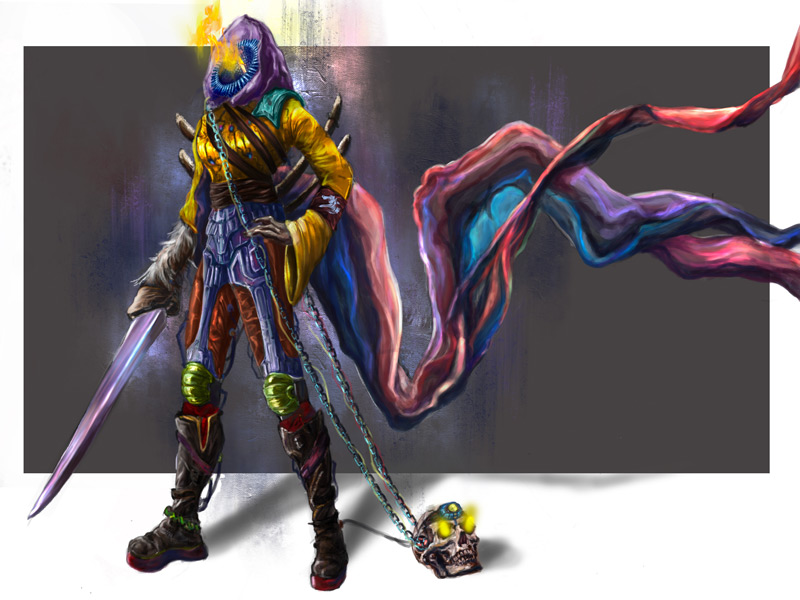 “The Headless Horseman” is a being of unknown provenience who chooses to appear to others as an apparition, or a phantasm. It is impossible to determine its gender due to its outlandish 19th-century attire adorned with a caboodle of misplaced prosthetics (a flame-flowing metal oval in lieu of the head, a horse’s limb extending into a sharp sword) and heavy wiring. It is believed that metal parts, cables and wires are there to scare off those who might want to challenge his/her rule over the post-apocalyptic world yet, their function is more down-to-earth. Since the Headless Horseman is deprived of a few vital organs (the brain, heart, and insides) due the encounter with the alien artificial asteroid, the extensive armory of radioactive wires, prosthetics and metal parts are there to maintain his/her life, and stabilize his/her vitals. He/she has become one with the oddities that are both a source of his/her existence as well as means to fend off those who dare attack him/her.

The ghoulish skull he/she carries on a long chain serves as his/her eyes and ears to the surrounding environment, connecting with him/her on a telepathic level. No one can tell whether the skull is part of his/her body or a trophy taken from one of his/her deceased enemies. 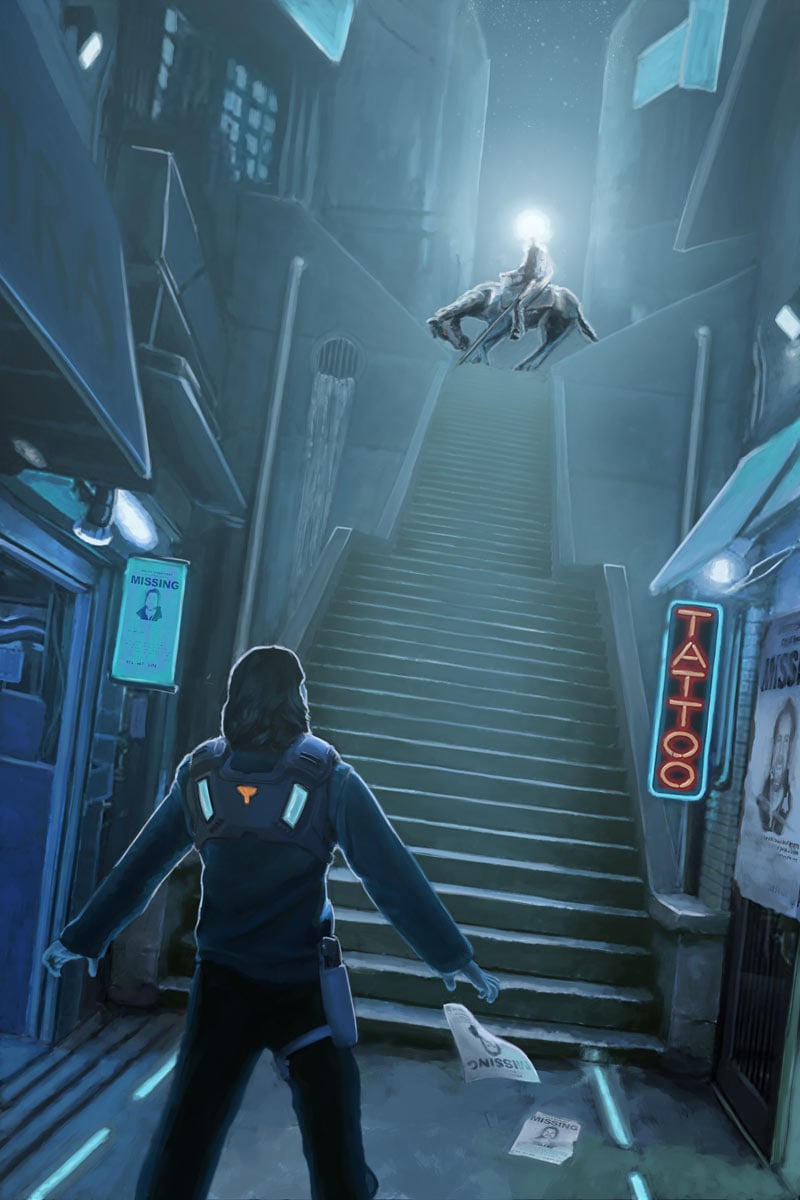 Spectropolis has been experiencing an uptick in missing persons cases, and a private investigator finds himself in the city's underbelly while searching for clues. Rumors float around that a mysterious figure known as "The Headless-Horseman" is behind the disappearances. While in a back alley, the private investigator senses someone's presence. He looks to see who he's encountered, but his body suddenly goes rigid as soon as he looks in their direction. Is it The Headless-Horseman? The figure is caught in the moonlight, making it difficult to see if they even have a head at all. A flash of light protrudes from the figure, and all goes dark for the investigator. 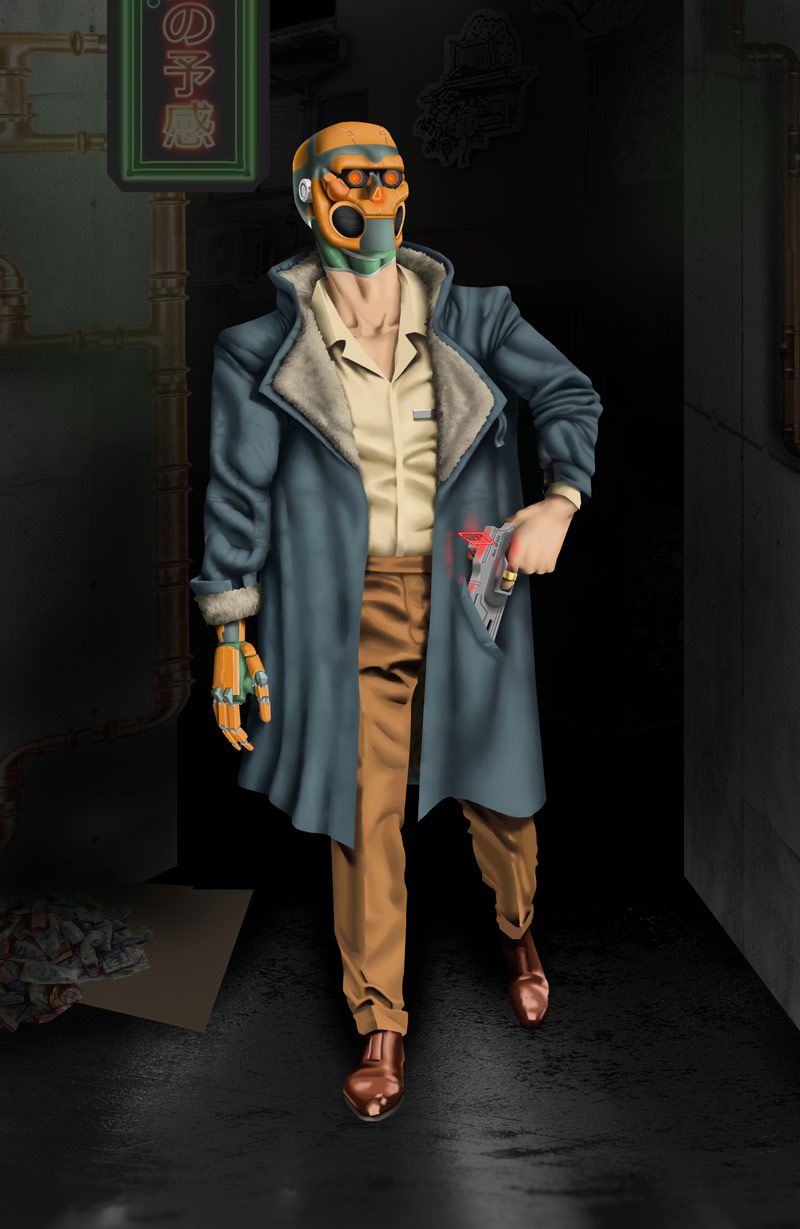 Bowie Florez was a soldier in the 42nd infantry division during the third World War, deployed in Turkey in the Battle for Diyarbakir. He was a tenacious soldier with over 450 confirmed kills by the end of his time in the conflict. During the last enemy assault in the Battle for Diyarbakir, Florez found himself surrounded by enemies and the corpses of his squad members in the front line of defence. He knew that his only chance of survival was to push back to the second line as he knew he would be able to assist the squads in defending that position. He dropped his guns and equipment sprinting for the second line, dodging bullets and cannon fire. Although as he jumped the makeshift barricade, he was struck twice by an androids’ 20 mm gun, splitting his skull and severing his forearm. Falling into the friendly bunker medics rushed his position salvaging his brain and cauterizing his arm, rushing him into a med tank and rushing him back to the larger American base in Ankara. Once his wounds were healed, he was discharged back to America with a cybernetic skull and arm to protect his brain and give him some form of the life he had before the war. He was unable to leave a violent lifestyle behind in Turkey, becoming one of the most infamous gangland figures in the entertainment district of Spectropolis, beating anyone who crosses him to a pulp and salvaging their cybernetics.

Congratulations to all students and alumni who entered the CG Spectrum art contest 👏 Stay tuned for the next one!

What it's like to be a concept artist: Interview with Tyler James

The five stages of digital illustration

The 6 fundamentals of art every good artist must learn