Game development and design is a complex process. Building a game involves creating worlds and populating them with characters, objects, weapons, vehicles, flora, fauna, landscapes, and a myriad combination of real-life elements. It requires scheduling, planning and creating a system of production.

So, what is the game design process?

The game design process can be divided into 3 stages (similar to filmmaking) - pre-production, production, post production. Here is a comprehensive look at what is involved. 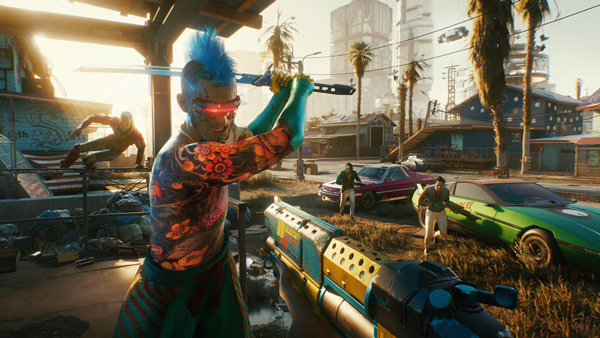 Developers will have different approaches, but the design process generally follows a similar flow. (Image: Cyberpunk 2077)

Pre-production will take up around 20% of the game design process. It involves planning, mapping, scheduling, research and gathering of resources for the production process ahead.

The core concept of the game is refined and expanded to articulate key elements such as the scope of the world, the mechanics of gameplay, the mapping of levels, character bios, complete storyline, etc.

Brainstorming sessions are an important part of fleshing out the main idea of the game. This is a time for all heads of departments to input their vision of what the game can be, and to bounce ideas off each other based on their own unique concerns for the process.

A library of characters, textures, and objects will be established and added to during the course of production. This is a resource vital to animators, 3D modelers and designers on the project.

The game's objectives will be clearly defined, concept art will be signed off, and it will be firmly established within its genre.

The script is pre-visualized via a storyboard. Each scene is sketched out showing character action, shot selection, the sequence of action and cinematic direction.

Research and development (R&D) is conducted into many areas:

The Game Development Document (GDD) is the blueprint for the production process. This is the plan from which all departments will work, outlining the key elements - what is the game and what is the point of it, what are the programming building blocks, what are the stages of the design process, etc.

The GDD will have sections dedicated to each individual department detailing their own specific needs, deadlines and resources. Concept art and aesthetics will be set out for the designers to work from.

The levels are mapped out across the course of the game. This is macro mapping, defining where the game is going, how it is played, how the player is led through it, etc.

One or more rudimentary prototypes will be produced to see what works and what doesn’t, if there are any bugs and if the concept has legs. The testers give feedback on the gameplay to improve the final product.

Production will take up about 60% of the design process. It is when the bulk of the work is done. It’s all systems go! Animation, 3D modeling, programming teams all begin working in tandem.

All the elements of the game are mapped onto a grid and rendered to 3D objects. This is a complex and time-consuming process, as all of the visual parts are often built from scratch.

The level action is blocked out, i.e. how the action on each level plays out, micro detailing of the action sequences and objectives of each level, how the player is guided towards the next level.

All 3D elements are then animated through a sequence of movements or through a scene, and the storyboard is brought to life.

Texturing is added to all the static meshes on the 3D models. Animators refer to the library of artifacts where textures have been designed and stored.

Lighting is an important element of design, it adds depth to the feel of the game, creating the 3D effect. It is used to create atmosphere, to build tension and replicate the real world.

Elements of function and interactivity are added.  These are the intricate functions that the player must perform to progress in the game to keep them engaged and interested.

AI is used to react to the actions or decisions the player makes. It is the ‘brain’ of the game, made up of complex algorithms that customize it for the player.

Cinematics are short how-to segments instructing the player how to play. They can include hints, character info, maps, etc. They are usually an interlude from the game where the player is given extra information to assist them in their progress.

Heads up displays (HUDs) update the player on their progress. They can provide information such as points/rewards status, timings, position on the map, etc. The menus instruct the player on the objectives, available elements, in-game purchase info, etc.

Sound design brings together all the dialogue, score, foley and sound effects required for the game’s soundscape. Visual effects, or special effects, are added to the sequences to enhance the visuals.

Quality assurance testers are brought in again to test the rough draft of the final game. They push it to its limits and provide valuable feedback on its playability and any glitches that need smoothing over.

The feedback from the testers is applied. The sound and visuals are then given a final polish to refine the finished product.

Artwork from the game ia used for creating packaging as well as marketing materials such as posters, online advertising, trailers, etc.

The game design process is a complex one requiring many iterations of the overall aesthetic of the game. The design team will produce 3D animation, print art, 2D renderings, storyboards, trailers, etc.

To be part of a game design team will test your abilities and expand your skills. But it is an exceptionally rewarding journey!

Step behind the screen and into the world of game development. Build worlds from your imagination and create your own gaming legacy!

To become a game designer you need to master the art. When you learn game design at CG Spectrum you'll get a comprehensive overview of what it’s like to design a game at a AAA company. With a professional game designer as your mentor, you'll be led through the game design process, and build hands-on skills in system and level design as you start bringing your own game to life!

What is the Difference Between Game Programming and Game Development?

Mental health in the VFX and video game industries