Find out why 80% of our advanced grads are now working in film and games, and how to join them!

We bring the industry to you!

Hear from some of our industry mentors and the admissions team to learn more about our film and game courses, how CG Spectrum works, the perks of our vibrant online community, and get some great career advice. Plus, our mentors answered questions from the public during our Q&A.

At CG Spectrum's Open Day, viewers get to:

If you have any questions about our school or courses, get in touch here. 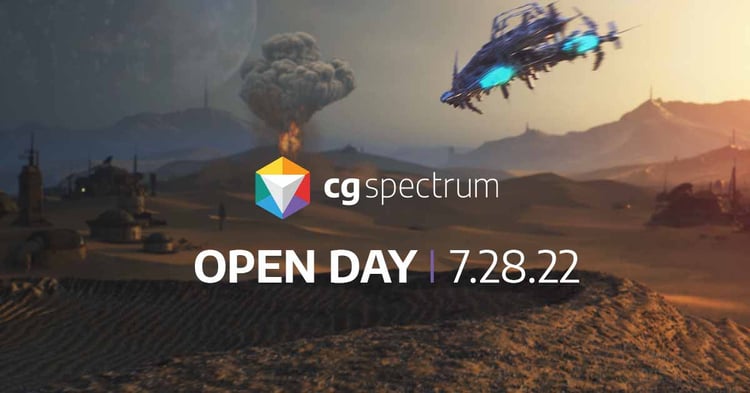 Alex Lori | CG Spectrum Foundations Dept. Head - Alex's impressive credits include Monsters Vs. Aliens and Teenage Mutant Ninja Turtles. He was a Lead Animator on the feature film The Prophet and an Animation Supervisor on The Adventures of Puss in Boots. As one of the few dedicated mentors at Bardel Entertainment company, he led many new animators through their budding careers, helping them to realize their full potential.

Brandon Reimchen | CG Spectrum Concept Art & Illustration Dept. Head - After receiving his degree in Fine Arts in 2003, Brandon began working in the video game industry as a Concept Artist. Since then he has produced work for companies like EA, Activision, Capcom, Gree, and Disney Interactive and is currently a Concept Art mentor for CG Spectrum. Brandon has created art for games like Crash Bandicoot, Prototype, and Resident Evil: Operation Raccoon City.

Brenda Grajales | CG Spectrum Course Advisor - Brenda has a background in film and TV with studio experience, including working as a Production Coordinator at Stereo D. She has worked on blockbuster films such as Dr. Strange, the Star Wars franchise, and Avengers Civil War. As a Course Advisor, Brenda can help with course and curriculum information, the application process, payment plan information, study options, and enrollment deadlines.

Mark Pullyblank | CG Spectrum 3D Animation Dept. Head - Mark has held lead positions at Rainmaker, Sony Pictures Imageworks, and Weta Digital working on films like Avatar, The Adventures of Tintin, The Smurfs, and Night at the Museum. As well as being the Animation Department head of CG Spectrum, Mark currently works at California State University in Chico California and undertakes freelance and consulting work at film and game studios.

Scott Claus | CG Spectrum Animation Manager - Disney's Fantasia sparked a lifelong love of animation for Scott. He worked as an animator for DreamWorks and Disney on films such as Pocahontas, Hunchback of Notre Dame, and Road to El Dorado before switching to CG and creature FX where he was part of the Oscar-winning team working on Life of Pi.

Sean Amlaner | CG Spectrum Compositing Dept. Head - Sean has worked as a Compositing Supervisor, Senior Compositor, and Senior Artist Trainer for studios such as Technicolor VFX, Sony Pictures Imageworks, Walt Disney Animation Studios, Rhythm & Hues, and many others. During his career, he has had the opportunity to work on projects such as Star Trek: Picard, Star Wars: The Rise of Skywalker, and Avengers: Infinity War.

William Faucher | CG Spectrum Mentor of Realtime - William has been in the entertainment industry for the past 11 years, starting as a 3D Modeler in the games industry, then becoming a Lighter, and DoP. The Canadian-born, Norway-based Unreal Artist is a mentor for CG Spectrum's Realtime Technical Artist and Virtual Production course. William's work includes VFX/CGI shots in Marvel's Black Panther, and HBO's Watchmen.

Free Open Days webinars to inspire you on your journey into the film and games industry.

Join our live expert panel to see how to kickstart your career in games or level up your game dev skills!

Hear from some of CG Spectrum's mentors, students and alumni!