Life of a VFX Supervisor: Interview with Jorge Razon

All VFX supervisors worth their salt navigate their teams successfully through the sometimes treacherous waters of production. A typical VFX house will take on up to 200 shots for a major production, this requires keeping a tight ship, rolling with the ebb and flow of pipeline processes. Life of a VFX Supervisor: Read on for Jorge's VFX shot breakdown from his time working on Game of Thrones (Credit: HBO)

In our webinar on the life of a VFX supervisor, CG Spectrum mentor Jorge Razon from SOHO VFX talked to Maxine Schnepf (Career Development Manager at CG Spectrum) about the intricacies of being a VFX supervisor for film and television. Razon then offered his VFX demo reel tips and gave insight into how your early years as a VFX artist will likely play out.

Jorge started out in 2002 as a generalist at a small commercial house doing TVCs, eventually working on Starhunter, which was the first show to air in HD. In his first two years there he worked in a variety of departments - Animation, Compositing, Lighting, and Dynamics in Maya. He was first introduced to film work when he joined Soho VFX  where he completed over 30 projects in a span of 10 years at the company. Jorge spent the next 3 years at Pixomondo in Toronto where he made full use of Houdini in every project he worked on. He is currently back at SOHO VFX where he is continuing his work as a CG and VFX Supervisor, as well as talent acquisition and R&D using Houdini.

What does a VFX Supervisor do?

Supervisors are briefed by directors and on-set supervisors who rely on them to deliver their vision. They receive a sequence edit from the production and break it down into the type of work it requires - CG, 2D animation, tracking, etc. Then, depending on the complexity of the shot, supervisors will assign tasks to artists based on their skillset.

Once a team has been assembled it is the supervisor’s task to oversee the creative vision of each scene,  solve the problems of difficult shots, and steer the departments towards completion of each effect.

The less is more approach to VFX production

Razon subscribes to the ‘less is more’ approach to managing the production pipeline. This involves streamlining the entire process from start to finish. Every project requires at least 4 major software packages (Maya, Mari, Houdini, Nuke) to communicate with each other. Every shot and sequence requires customized visual effects, processes need to be simplified to address notes from clients in a timely manner.

The goal is to use as few resources as possible & still generate high-quality work. Meeting deadlines is key.

Complex shots can induce over-thinking resulting in a complicated process that isn't what the client wants. Falling into this trap is easy, so keeping the task simple the best default option.

Assessing the issues of each shot with the team at the outset is the best way to approach the initial brief, focusing on simplicity and the best solutions for the scene. SOHO specializes in coming up with the most efficient way to solve the issues of each sequence. Sometimes the nature of the shot doesn’t allow for simplicity, especially when dealing with water shots there are few viable shortcuts, so these more complex processes are built into the schedule.

How COVID-19 has affected VFX production

SOHO VFX managed the difficult months of Covid lockdowns by keeping supervisors on-site, allowing them to review work in screening rooms, while animators and effects staff moved into their home environments. This new working model required a high level of collaboration between all involved and was successfully smoothed over by SOHO during the course of 2020. They are currently fully embracing a hybrid work environment. Artists can choose to work from home, in-studio or both. SOHO are continuously improving their onboarding process to make the move simple and easy for new hires.

SOHO VFX had a lot of creative input on their work on the last season of Game of Thrones. ‘They don’t care what you do as long as it looks good,’ remarked Razon about the working relationship between SOHO and the GOT producers. The artwork was provided by the production from their Concept Art Department, SOHO matched the effects to the brief.

There was a lot of plate-work done for the major battle sequences on the show. Fire simulations were a major part of one sequence which featured smoking pyres surrounded by bodies as islands of action within the shot. Five physical pyres were captured in-camera, with over a hundred simulated added in as effects. These were procedurized as the scene was dense with action and required multiple replications. Footage of real fire was enhanced with VFX, then simulated, cloned, and matched to fill the shot. 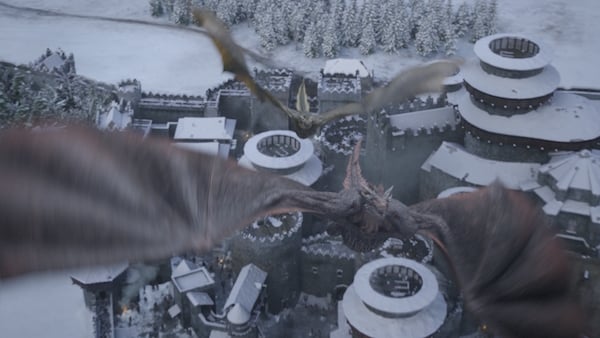 Dragons over Winterfell scene in Season 8, Episode 5 of Game of Thrones.

The Winterfell set also required special effect treatment due to Art Department budget constraints and was finished in post. It had changed over the course of the seasons, so SOHO did their research on its multiple incarnations over the seasons to produce variations of landscape, architecture, snow mass, etc. Scenes featuring dragons flying over Winterfell required 2D images and integration. The challenge these scenes presented was integrating VFX with live-action geography featuring moving characters and intricate tent structures. The SOHO team pulled together to figure out the best way of seamlessly integrating the CGI creatures with the matte paintings. This was a complex sequence that involved the entire company working on numerous elements. All departments were on board to create models, VFX, environmental effects, texturing, lighting, 2D elements, compositing, etc.

Fight sequences involved adding character blood and wounds as well as replacing the rubber swords (that usually bend and flop in the footage) with realistic deadly weapons.

Scenes needed to be tracked, blood was added to the tips of the weapons according to censorship standards for violence on screen.

A scene in The Boys required a soda can to float across a room. The production's Art Department provided a physical prop from which SOHO created a CG version. Maya was used to crush the can, enhanced by a liquid being wrung out of it in Houdini. This was a simple asset that was created through the entire pipeline process. It went through many iterations, with scratches, dirt, jagged edges and fingerprints added, and variations on liquid spillage.

Soda can effect in The Boys Season 1.

Eye laser effects for the Homelander character were mostly done as a 2D effect, with lens flares and smoke added. The challenge in these kinds of shots that require multiple VFX artists working on the one effect is maintaining consistency. Supervisors will QC (quality control) the progress of the shot, ensuring multiple references are given to the team to create a uniform look. SOHO’s QC process is to review everyone’s work in a screening room, load a keyframe shot, and reference it with all the other shots to identify any anomalies. This can be tricky because some shots will be graded or lit differently so adjustments need to be made to render a seamless sequence. SOHO had a blast working with the Umbrella Academy production. A key scene involved the trajectory of a bullet within a scene. It was filmed at one million frames per second, with muzzle flashes added in post, as well as the effect of the bullet hitting a force field. The scene is set in a cornfield, with the bullet ripping through the foliage, SOHO added leaves, and corn stalks as CGI.

They will also use HDR (high dynamic range) images to capture reference material and on-set lighting.

A scene featuring water effects, probably the most difficult element to recreate, was an epic yet satisfying challenge met by the SOHO team. It starts with a wide shot of a small lake that was populated with grass and trees to set up the environment of the scene. Houdini Spectrum Water was used for the still water simulated with surface ripples created by the wind. The character then makes the water boil, followed by splashes in a mid-shot, and then a large wave in wide shot.

The wave had a specific art-directed shape that the production was looking for. They wanted a mini tidal wave curling into a concave rip caused by the character using her powers to push the water back to reveal a young boy who needed saving. As the boy’s body is revealed at the bottom of the lake water droplets are still being lifted into the suspended wave, creating a surreal reversal of gravity as the hero rushes in to rescue the boy. Wave sequence in The Umbrella Academy.

One complicated shot involved the camera moving down through water sprays to focus on the rescue of the boy on the lake floor. This was done by sculpting how the water would look in simulation while moving in slow motion to enhance the dramatic nature of the scene. The wave then crashed down in wide shot once the hero released her hold on it. Effects continued with small waves in the background of the final shot where she is reviving the young boy. As the scene pulled out to a wide shot to close out the sequence the plate was extended to appear bigger than the original shot by adding trees to the original landscape.

CG Spectrum mentor Daniel Hourigan's tutorial on how to create a wave in Houdini.

What to expect in your first years as a VFX artist

Many VFX artists starting out in the industry want to work on the hero shots that get a lot of traction on Youtube and in viral videos, but around 70% of effects that major studios produce are ‘invisible effects’ that seamlessly integrate effects into what’s on screen. The hero shots are what will initially get you hooked into a career in VFX, however, especially at an entry-level, it will be the invisible effects that will be the grunt work of your early years.

Your first two years of work in VFX are like paid training. You will learn a lot and be moved around a lot.  Entry-level work is allocated according to what the artist can do based on their reel and experience.

They are assigned what the company knows they can do and then are gradually introduced to more complex work. Juniors are often paired with senior operators who supervise them and train them in company standards.

Once you’ve established yourself in a workplace, talk to your managers or supervisors about what your career goals are. Let them know where you see yourself in five or ten years, if you don’t tell them they won’t know how to help you achieve your goals. Talk to people about where you want to go with your career because it won’t just fall into your lap.

Want to start a career as a VFX artist?

The journey from junior VFX artist to supervisor is a long one. You will sail on many ships through production storms; ride the waves of intense learning; survive tests and trials; and cruise the calm waters of effective supervision. If you are ready for the adventure take a look at our visual effects courses and hop on board. Who knows where your voyage will end!