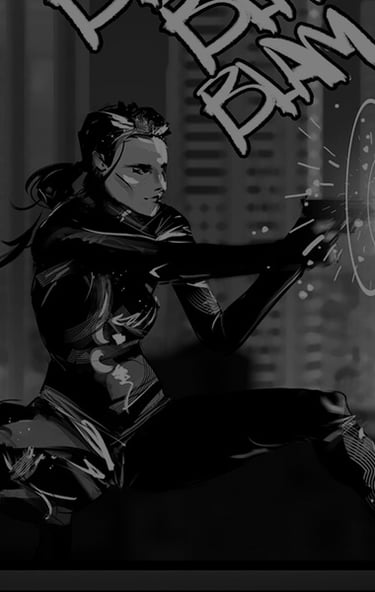 The role, salary, software and skills of a comic book illustrator

The comic or graphic novel genre employs visuals in a series of sequential panels to tell a story. Most comic art includes text which may or may not be written by the illustrator, therefore they must learn to incorporate the text and font as part of the overall design.

Illustrators of comic strips tend to be the writers as well as illustrators of the series. Comic books or graphic novels may have authors writing the text, but it is ultimately up to the illustrator to integrate the text into the graphic.

Cartoons are another form of comic narrative, they are usually comical or satirical in nature and can be presented as single panels of image and text. They can pack a punch in expressing a powerful idea or keen observation, such as in political cartoons. Fumetti use photographic images in the comic book style to tell a story.

The role of the comic illustrator is to create the illustrations for comic strips, books and cartoons. They must express ideas, story, situation and character very clearly and effectively. The Comic Illustrator has a talent for dynamic visual communication because this genre is highly expressive and designed to pack a punch in terms of message, especially in the case of single panel cartoons.

The responsibilities of the Comic Illustrator may include:

Many Comic Illustrators work with pen and paper to sketch out their illustrations, these are then imported into software which is used to finish the artwork and deliver to publishing houses or newspapers.

Software that Comic Illustrators may use include:

Comic Illustrators who author their own work tend to have a strong sense of humor or for the absurd. They must have a sharp-witted mind to produce social or political commentary, and a keen sense for storytelling if they create comic books.

When working with a writer the ability to collaborate effectively is key to a successful comic. These partnerships can be very lucrative and influential, especially when working for big brands such as Marvel or DC Comics.

Employers may look for the following skills in Comic Illustrators:

The average wage of a Comic Illustrator runs between USD $32,000 for a junior position to USD $77,000 for a senior position. (Source: Glassdoor)

To learn more about this field, visit: What is Digital Illustration? or What is Concept Art?

This intensive course covers environment, creature and character design, plus matte painting using hand painting, photo-bashing and paint-over techniques. The final term focuses on career development to prepare you for a successful career as a concept artist for film and games.

Discover advanced character illustration techniques and use them to create various narrative artworks to client briefs. Whether you want to work in film, games or book publishing, the final term focuses on career development to prepare you for an exciting career in your chosen field.