Anatomy for Sculptors, the publisher of anatomy books for artists, has also released their digital écorché: a free human anatomy reference tool. It contains multiple 3D models with anatomically accurate visual references that are easy to navigate and understand. The models are color-coded and feature multiple useful views with block-outs, bony landmarks, etc.

It's an excellent reference tool, particularly if you're studying 3D modeling or animation!

An écorché is an artwork in which the human body is depicted without skin and fat to illustrate muscles. The word écorché comes from French, meaning 'skinned'.

The core model of the Anatomy for Sculptors reference tool is an écorché made originally in the 19th century by Jacques-Eugène Caudron called L'écorché combattant. 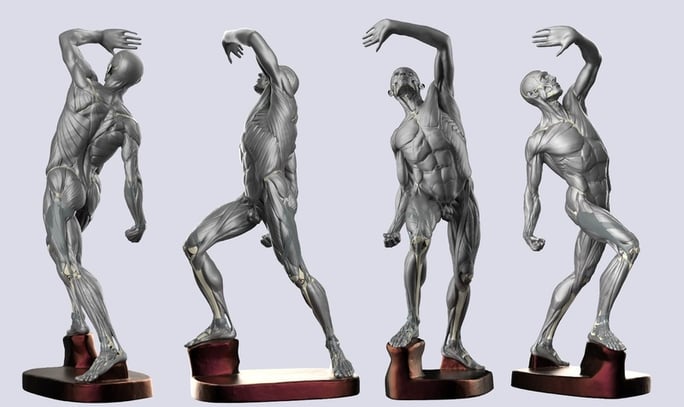 An enhanced 3D model of L'écorché combattant by Jacques-Eugène Caudron.

The skinned figure allows studying the arrangement and shape of muscles, veins, and joints. While there are écorchés of animals, particularly of skinned horses, the great majority of écorchés are depictions of the human male figure.

The unique posture of Caudron’s L'écorché combattant makes it an excellent aid in anatomy studies for artists. In this écorché, you can observe muscle flexion, extension, abduction, adduction, supination, pronation, etc. Even the figure’s torso is in motion, with one of its sides bent and the other extended.

In this article, you’ll read the story of a plaster figurine of Caudron’s L'écorché combattant that Anatomy for Sculptors found in the Museum of the History of Medicine in Riga. You’ll also read about the process of creating its digital model and see their team’s modifications made to L'écorché combattant. Caudron's L'écorché combattant in the Museum of the History of Medicine in Riga, Latvia.

An écorché is an excellent tool for artists in their studies, and Uldis Zarins, the author of the Anatomy for Sculptors book series, had often thought about making his own digital écorché model. The benefit of scanning an écorché and recreating it digitally is that the model can then be measured using modeling software. This allows for identifying the original model’s anatomical mistakes and correcting them.

Some fixed-up 3D models of écorchés for artists already exist. One example is the Eaton Houdon Écorché by Michael Defeo, a contemporary anatomical figure based on the classic L’Écorché, the 18th-century anatomy study by French neoclassical sculptor Jean-Antoine Houdon. 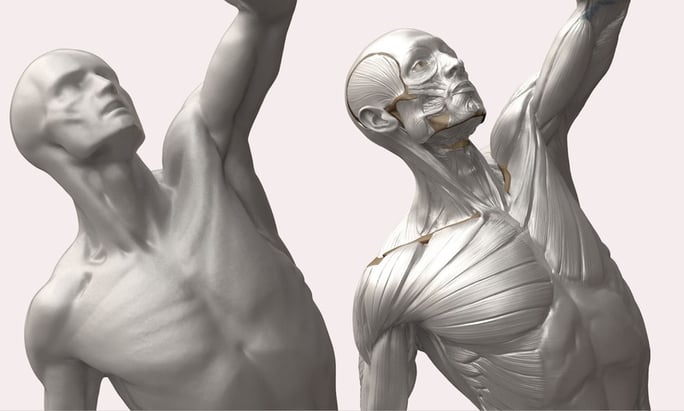 The keyword here is neoclassical – the sculpture follows strict canons, and its form is highly influenced by the aesthetic standards of the neoclassical style. Although Houdon’s écorché is widely known and used by artists worldwide, it is not the most informative écorché, mainly because its pose is very static and does not show much variety in muscle tension.

In early 2021, Uldis stumbled upon a small plaster cast of an écorché in the Museum of the History of Medicine in Riga – L'écorché combattant by the French sculptor Jacques-Eugène Caudron. This écorché differs from others because of its unique posture and great anatomical precision. That makes it a great aid in anatomy studies for artists.

It is all there –flexion, extension, abduction, adduction, supination, pronation, etc. Even the figure’s torso is in motion, with one of its sides bent, and the other one extended. This extraordinary find inspired Uldis to pursue his idea of creating a digital 3D écorché. 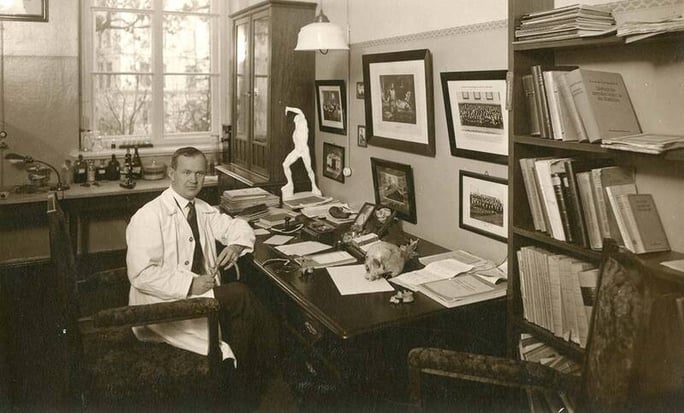 Professor Jēkabs Prīmanis in his cabinet at the Institute of Anatomy in Riga, 1929.

In cooperation with the Museum of the History of Medicine, the Anatomy for Sculptors team scanned the L'écorché combattant, creating a digital primary mesh of the sculpture ready for measuring, examining, and transformation. Now, we’ll go into the details of the modeling process and the changes made by Anatomy for Sculptors to the original model.

Corrections and additions to the model

The écorché digital 3D model has had some corrections and additions. Once Uldis acquired the freshly scanned mesh of L'écorché combattant, he examined the basic geometry of the sculpture. He analyzed the inner symmetry of the pelvis and thorax and checked their alignment with the central axis of the body. To do that precisely, Uldis embedded an anatomically correct skeleton inside the mesh. 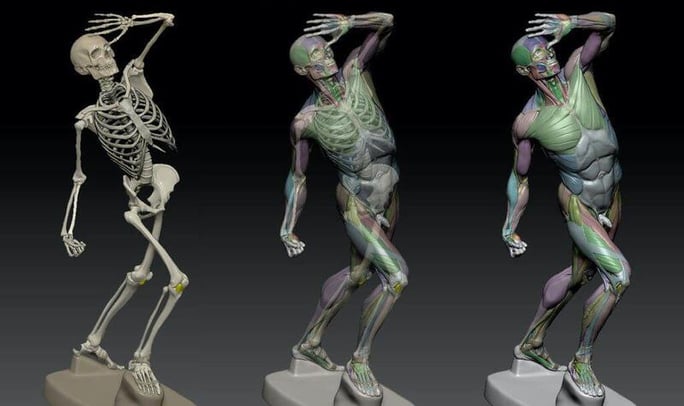 The mesh of L'écorché combattant with a skeleton embedded in it.

This led to corrections and positioning of the pelvis along the bony landmarks of the body, such as ASIS and PSIS. Even though some modifications were necessary, it was a pleasant surprise to see very high anatomical precision in a sculpture of such a small size, given that all the measurements at that time were made with a caliper.

Another discovery was that the proportions of the écorché had been slightly adapted to suit the composition. The thorax had been pulled a bit closer to the pelvis than necessary, and the left arm was a bit longer than the right arm.

The shifting of the ASIS changed the following muscles: Sartorius, Tensor fascia latae, and Rectus femoris. The correction of PSIS demanded changes in Latissimus dorsi and Gluteus maximus origins.

The muscles around ASIS in the 3D digital model of L'écorché combattant.

With the basic geometry and the muscles taken care of, it was time to look at the result and compare it to real-life anatomy examples. The Anatomy for Sculptors team compared the anatomy of the 3D model to radiological data from CTs, CTAs, MRIs, and pictures from cadaver dissections. This work only confirmed the accuracy of the original écorché made by Caudron. The head and neck of L'écorché combattant with muscle detailing added.

Anatomy of the eye and surrounding areas

Anatomy for Sculptors also fixed the eye area with a new pair of eyeballs and adjusted the corners of the eyes. The aesthetical tradition at the time demanded that the mouth of the sculpture stays open. To avoid the need to detail the oral cavity (and, in Uldis’ opinion, to also reduce the creepiness level), the mouth has been shut.

Caudron also modeled his écorché without one ear to better illustrate the connection of the head to the neck. In the Anatomy for Sculptors version, they gave the poor man his ear back after almost two centuries. The face of the 3D model of L'écorché combattant next to the original plaster cast.

Another significant addition to the model is connective tissue, most notably the Iliotibial tract and Bicipital tendon. Some connective tissue has also been added to the feet, and fingers and toes have also become more detailed. Iliotibial tract added to the 3D model of L'écorché combattant.

Neoclassicism, the leading art style at the time, tried to exclude or reduce all the so-called “primitive subjects” from the artworks – this includes all the body elements related to reproduction. In the case of L'écorché combattant, the penis in the sculpture is depicted as unrealistically small, and in the digital 3D model, it got enlarged to make it more realistic. Anatomy for Sculptors artists also added the pelvic floor and the anus to the model.

The final step was to color-code the muscular system, including many smaller muscles that were not visible in the original sculpture. Anatomy for Sculptors has also made a separate removable mesh for the connective tissue to increase the flexibility of this 3D model when it is used in anatomy studies.

Anatomy for Sculptors are publishers of the bestselling anatomy books for artists – Understanding the Human Figure, Anatomy of Facial Expression, and Form of the Head and Neck. They have also published other online tools for artists, such as the Human Proportions Calculator, which is available on their website for free!

Also, did you know that one of the many perks of studying at CG Spectrum is that students get a discount on any Anatomy for Sculptors book?

Want to create realistic 3D characters under the guidance of an industry expert, using digital écorché and other industry tools?

At CG Spectrum, our 3D modeling courses are designed to get you ready for a career in film and games. Led by experts who’ve worked on projects like Arcane, Overwatch 2, Pacific Rim, Wreck-it Ralph 2, and The Mandalorian, you'll learn how to model amazing 3D props, characters, and environments using industry-standard software like Maya and Substance Painter.

Also, did you know that one of the many perks of studying at CG Spectrum is that students get a discount on any Anatomy for Sculptors book?

Study 3D modeling and sculpt your skills for a career in the film and games industry!