Kristian Kebbe is an indie game developer and FX artist who began his career in the film industry right after graduating from CG Spectrum's Houdini course. Having worked on several Hollywood blockbusters like Aquaman, Spider-Man: Far from Home, and Captain Marvel, Kristian decided to take a break from film to pursue his long-time dream: to develop his own indie game.

Kristian's game Lucen is an action-adventure game in which you harness light with your weapons, on a quest to ask the Old Gods for help restoring your darkness-shrouded village.

Kristian is using Houdini as the primary tool to create game assets and was invited to speak on this topic at GDC 2020. Due to the pandemic, he delivered his Houdini HIVE talk virtually, which you can watch at the end of this interview.

But first, we chat with Kris about the making of his visually stunning game Lucen, and how he's found support and a strong fanbase through the Lucen devlogs and the game dev community.

A sneak peek at Lucen, by indie dev and alumni Kristian Kebbe

Thanks for taking the time to chat with us Kris! Making a video game on your own is an enormous undertaking. How do you structure your day and set deadlines for yourself? Does the Lucen devlog help you stay accountable?

Making a game is an enormous undertaking indeed, and I'm finding it equal parts challenging and rewarding.

I structure my day based on small tasks, all of which culminate in completing a larger milestone/deadline (i.e. having a certain gameplay mechanic, or the demo done by X date). These broader deadlines are broken down into smaller tasks that I can choose from day to day.

There is a lot of variety in them, and I find that being able to jump between different tasks such as gameplay logic, asset creation or visual effects helps keep things feeling fresh and keeps motivation up.

The devlogs have been a fantastic way to keep engaged with the community around Lucen and show people what I'm working on.

They definitely help me keep on track too, as now I have more people than just myself who are anticipating seeing progress!

(Kris recently gave away a free tree pack for anyone to use. Walkthrough video below!)

What do you want your player to feel when they enter the world of Lucen?

I want to evoke a sense of wonder and adventure in the player, and entice them to explore the world! There will be many beasts to encounter and fight, and story and lore to uncover by exploring the world in Lucen.

Talk to us about storytelling and building a good story arc for Lucen. How did you map out the story and come up with challenges for Lucen to encounter?

The broader idea for the story comes from my teen years, when I was brainstorming a dream game with some friends. I've fleshed that out with Lucen and placed emphasis on his journey. 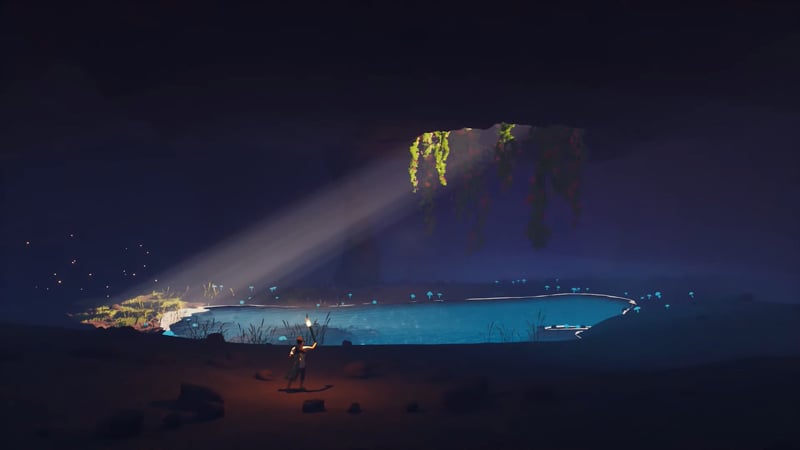 The premise is that Lucen, a young boy, awakes to find his village shrouded in darkness, and must venture out into the vast wilderness to find the mysterious Old gods, and ask for their help restoring light to his village.

Lucen is a story about leaving a place of comfort and setting off into the unknown - something I think all of us have to do at least once in our lives.

With Lucen, I want it to be about discovery, and the gameplay challenges and set pieces will progress the narrative toward learning more about the world Lucen inhabits, and his place in it. 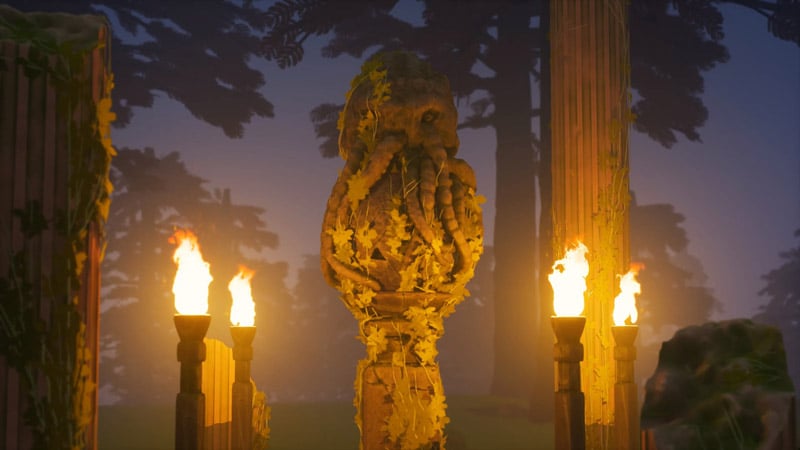 You've put in a lot of time to nurture a community for Lucen. What have you most enjoyed about this process? Have you changed elements of the game based on feedback?

I have been really blessed with the community that has grown around Lucen!

The most enjoyable part of it is seeing people getting excited for what I'm creating - it gives me energy and drive to make Lucen the best that I can!

The core of the game hasn't changed based on feedback, but there have been some useful suggestions by the community that have helped shape and improve certain elements for sure. And once play testing comes around I'm sure there will be plenty more. 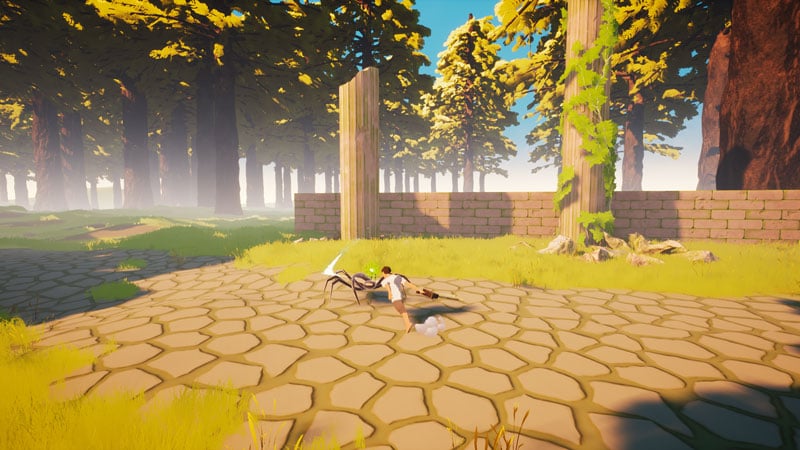 You've also been proactive in connecting with the game dev community for support as you build the game. Can you tell us about some of the connections you've made with people there?

There are some great communities where you can share your work and get feedback, and they have proven very useful. The sound designer (Sami Schellenberg) and composer (Lukas Piel) both reached out to me after having seen my game on some social media platforms like Reddit and Facebook.

I'm also very active on Twitter and have connected with lots of awesome devs there who always go above and beyond to provide help and advice!

Chris Murphy from Epic Games is really helpful and gave me some great feedback about improving the performance of rendering in my game, and numerous devs have given me fantastic advice about all things dev related - Simon Boxer (Ring of Pain, The Dungeon Experience), David Wehle (The First Tree, Game Dev Unlocked), and Craig Ritchie (Broken Roads), to name a few.

Meredith and Liam from Film VIC are really helpful as well, and offered me some insight into talking with publishers and pitching! 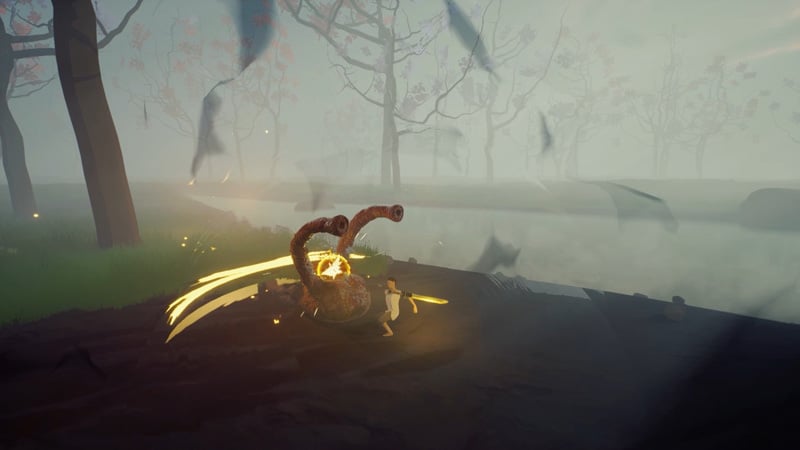 What lessons from working in film have you applied to your game? (Referring specifically about your cinematic trailer - it's so good!)

Thanks for the kind words on the trailer! My background in photography as well as film really helped achieve the cinematic feeling I was going for with the trailer. The camera moves and lighting played a big part in conveying the scale of the world and I had a lot of fun putting that together.

What are 3 cool things you learned about Houdini while making Lucen?

Rigging is a big one! Houdini is so powerful for rigging, and I've really enjoyed working with it for that.

Vertex animation textures are also a game changer, allowing you to write out the motion from RBD, cloth, and fluid simulations to textures to use for vertex animation in Unreal or Unity!

Another big thing I learned was using Houdini to create and populate the landscape for the world - you can bring it in as an HDA in Unreal Engine, and procedurally populate it with any UE4 objects - sounds, blueprints, meshes, lights, everything can be defined in one asset!

How did the Houdini Diploma help you in the making of this game?

Learning Houdini with CG Spectrum helped set me up for Houdini - be it the VFX industry or games. It taught me the building blocks that made it easier to continue to develop my skills and adapt to new concepts.

Having a 1-on-1 mentorship really gave me a window into how other Houdini pros think and approach problems too, and that helped in developing my own problem solving skills. 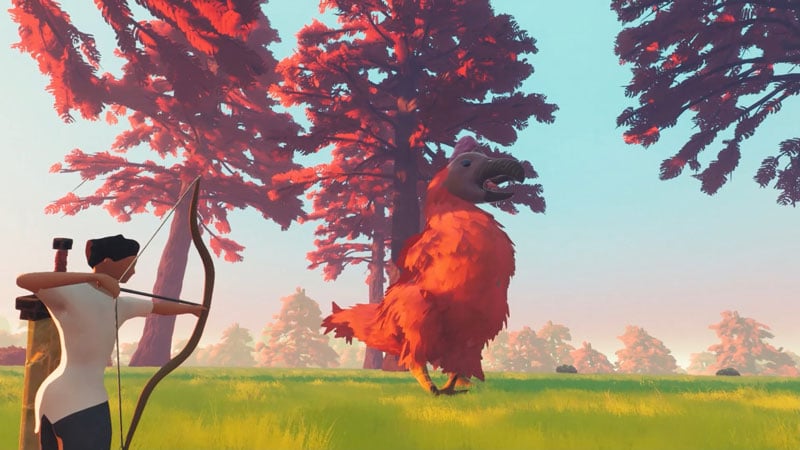 Let's talk about the chicken in the room. It's massive! What inspired some of the characters in the game?

Haha! The chicken was a fun one - that's one of the boss characters in Lucen, and is guarding a precious light orb that you need to acquire.

Lucen's character has recently undergone an upgrade (which you can see on my Twitter or Youtube devlog), and is now in line with how I envisioned the character when thinking up the story as a teen. 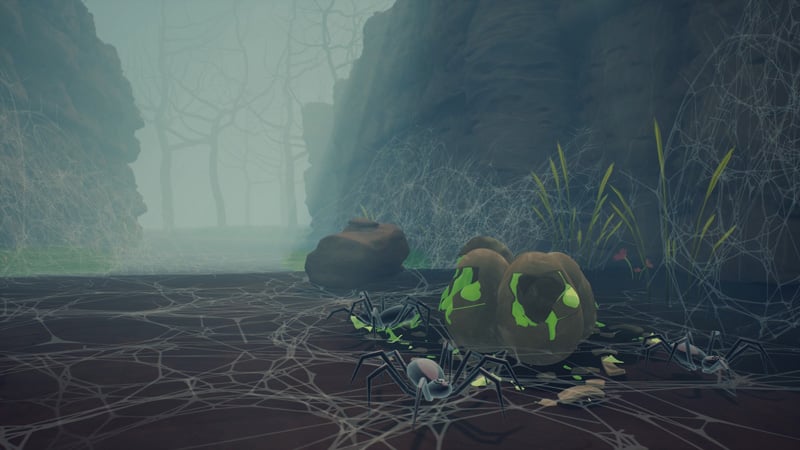 We've already added Lucen to our Steam Wishlist. What other key dates should we be looking out for?

Right now the demo is planned to be available around July/August, but there is no concrete date yet! I am also still hoping to eventually launch the Kickstarter I had previously postponed, potentially sometime after the demo!

Thanks for chatting with us Kris, we look forward to playing Lucen!

For more updates, check out Twitter and Kristian's YouTube devlog and add Lucen to your Steam Wishlist.

Be sure to also check out the trailer and Kristian's SideFX talk below to see exactly how he's using Houdini to make his game!

Discover all Houdini has to offer with an industry expert as your personal mentor! CG Spectrum mentors are actively working at major studios on blockbusters like Star Wars, Game of Thrones, Ready Player One, and Terminator. Choose from 1-on-1 or small group classes!